A regional newspaper originally founded more than 200 years ago has ceased publication indefinitely as its owner prepares to launch two new titles.

Publication of the Truro-based Sunday Independent has been placed on hold since Christmas due to what has been described as a “toxic mixture” of rising costs and the effects of the coronavirus pandemic.

However, owner Independent Media has also revealed it is launching two new editions of its Cornwall-wide ‘Voice’ series of newspapers next month, with Independent staff being redeployed to work on the titles.

The company has not yet revealed which areas the new editions, set to launch on 2 February, will cover. 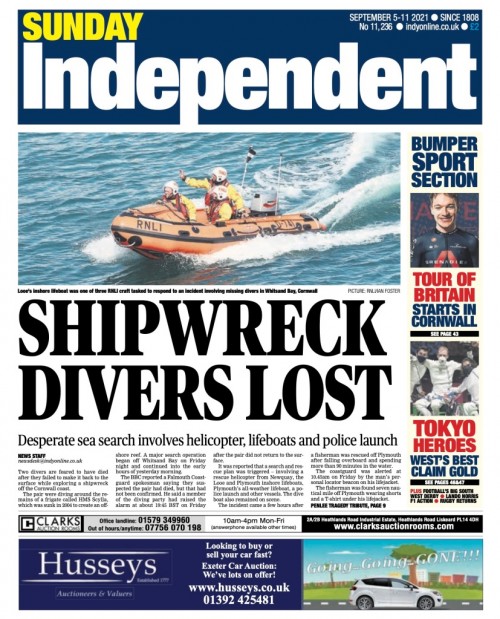 The Sunday Independent was first published in 1808 and has undergone a series of changes of ownership in recent years.

Part of Tindle Newspapers between 2004 and 2014, it was sold on to Tindle’s then managing director Brian Doel before being bought in 2017 by Peter Masters, the owner of Truro City football club.

Stuart Fraser, the company’s editor-in-chief, told HTFP: “The Sunday Independent has been placed on hold since Christmas and its position is under constant review.

“At the moment, we are not printing because of a toxic mixture of rising costs and the effects of the pandemic which, in the first lockdown, deprived people of the sport for which buying the Independent was such a strong reason.

“The Omicron uncertainty before and during the festive period had another knockback effect on sport at national and local level, and many of our clients have been cautious about their advertising budgets because of their own uncertainties around rising costs.

“It has also been difficult to find print slots late enough on a Saturday to enable us to carry the level of sport reporting which can satisfy our readership.

“We are constantly reviewing the situation in the hope of better days and a better climate for the Indy.”

“No jobs have been affected as all staff efforts have been focused on the Voice titles.”