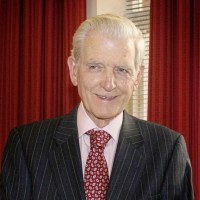 The chairman and former managing editor of a daily newspaper has died aged 92.

Tributes have been paid to Jim Fitzpatrick, who was involved in the running of the Irish News for more than half a century.

A solicitor by profession, Jim followed in the footsteps of his father James Snr by joining the board of the Belfast-based News in 1969.

He later took a night course in journalism, learned shorthand and began to write articles and conduct interviews for the paper.

Jim, pictured, made regular appearances in its newsroom until just a few weeks ago. His son Dominic, the paper’s current managing director, described him as “an inspiration to so many people”.

Said Dominic: “His desire to be involved in the Irish News was driven by a belief that society needed a newspaper that could stand for truth and justice, particularly at such a turbulent time in history.

“Under his direction the paper has been transformed into the success it is today.”

Editor Noel Doran added “[Jim was a] giant of the newspaper industry as well as a key figure in the search for peace and reconciliation in Ireland who also had significant roles in law, business and the arts.

“Although he maintained a low profile, he was a noted philanthropist who probably had the strongest personal faith of anyone I have ever met.

“He was completely dedicated to his family and to his staff at all levels in the Irish News, and serving as his editor for the last 24 years has been the greatest privilege of my career.”

Jim took charge of the News after its future was thrown “into severe doubt” following the death of then-chairman Daniel McSparran and his sister Mary in a road crash in May 1981.

In an obituary for the News, Jim’s friend Dr Éamon Phoenix wrote: “A temporary arrangement with the remaining members of the McSparran family allowed Mr Fitzpatrick, then 52, to become managing editor of the paper.

“These were uncertain and traumatic days for all concerned, not least the 150 employees.

“Mr Fitzpatrick outlined his vision of a modern, reinvigorated newspaper in tune with the hopes and aspirations of the nationalist community, then recovering from the trauma of the Hunger Strike.

“Over the next few years, Jim Fitzpatrick ‘invested everything he had’ in The Irish News. It was the first local newspaper to go for the ‘direct input’ process, finally abandoning the old, revered ‘hot metal’ process with its army of compositors. Wages and conditions were improved for staff.”

“Mr Fitzpatrick was also keen to attract first-class journalists and managerial staff. The opinion pages featured a host of new columnists who challenged traditional perceptions about politics, economics and social affairs. Under his tutelage the Irish News became a voice and not an echo.

“Jim had the diplomatic skills of a born ‘influencer’ and used the paper’s editorial columns in the 1980s and ’90s to promote the need for a more radical approach to the Irish question which would respect the rights of both traditions.”