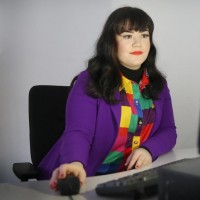 A regional daily has reinstated a ban on “bad news” as part of its campaign for positive mental health.

The Greenock Telegraph will use its Facebook, Twitter and Instagram platforms for only good news tomorrow following a revival of the newspaper’s ‘Time to Talk’ drive.

HTFP reported last year how the Telegraph had led its Newsquest sister titles in enforcing a social media ban on bad news for 24 hours in a bid to promote awareness of positive mental health.

As part of this year’s initiative, the Telegraph will share good news stories and advice on where to turn for help for those struggling.

Telegraph digital audience and content editor Amy Shearer, pictured, told HTFP: “At the Greenock Telegraph, we wanted to be a catalyst for change.

“All too often the media are portrayed as being of detriment to mental health, not in support of normalising conversations surrounding it.

“As well as sharing positive stories about local people doing well and overcoming struggle to find hope, the campaign has been endorsed by some amazing celebrities such as Still Game star Jane McCarry and entertainer and Britain’s Got Talent star, Edward Reid, who join a whole host of individuals who will be sending video messages of support and encouragement across our platforms.”

The print editions of the Telegraph will also get a ‘makeover’ today and tomorrow as part of the campaign.

Last year Amy, who was recognised by PPA Scotland for her work on the campaign, shone a light on the support offered on its patch in a bid to inspire others to reach out for assistance.

The Telegraph subsequently reported its newsroom was contacted by a string of local mental health and counselling charities, who reported a surge in demand for their services – and volunteers coming forward – thanks to the initiative.

Amy added: “Last year I shared my own story as all too often, people remain silent as they don’t want to speak up for fear of judgement.

“The more we can do to normalise mental health issues, the less taboo the subject will become.”