A regional digital editor who scooped a top prize for young journalists has hit back at those who questioned why she was entering a “dead industry”.

The Greenock Telegraph’s Amy Shearer has been named Young Journalist of the Year category at the PPA Scotland Awards, which recognise achievement across the Scottish publishing and media industry.

Amy, pictured wither her award, began her career as a trainee multimedia journalist with the Newsquest-owned Telegraph in February 2020.

She was promoted to her current role, digital audience and content editor, in August this year. 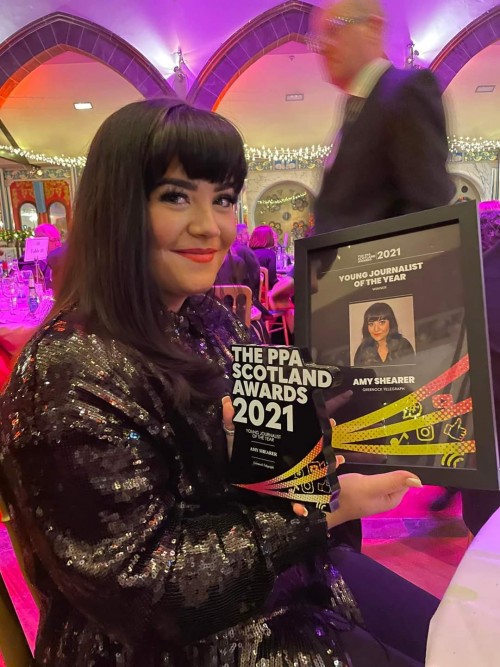 Speaking to HTFP, Amy said: “I’m truly delighted to have been recognised by PPA Scotland as their Young Journalist of the Year.

“To start my career in this field during a global pandemic has not been without its challenges, but it has been incredibly rewarding and humbling to share the stories of the brilliant people of Inverclyde.

“I work with a fantastic team and I’m privileged to be trusted by so many local people with things that matter most to them.

“When I started working as a journalist people asked me why I was entering a ‘dead industry’ – but seeing such outstanding talent and incredible journalists be recognised last night for their work has confirmed that I’ve made the correct choice in entering an industry in which I will hopefully have a long and fulfilling career.”

Amy received her prize at arts and entertainment venue Oran Mor, in Glasgow, on Wednesday evening.

Also nominated in the category were Eilidh Akilade, of The Skinny, White Light Media’s Katie Cutforth, James Hanton, of The Indiependent and My Weekly’s Hope Wilson.