A weekly newspaper is hoping for a sales boost after its sporting coverage received international interest.

The club secured promotion with a 1-1 draw against Carlisle United on Tuesday night.

The wrap has received praise from beyond the Echo’s patch, with Town fans elsewhere in the UK and further afield asking whether they could buy a copy. 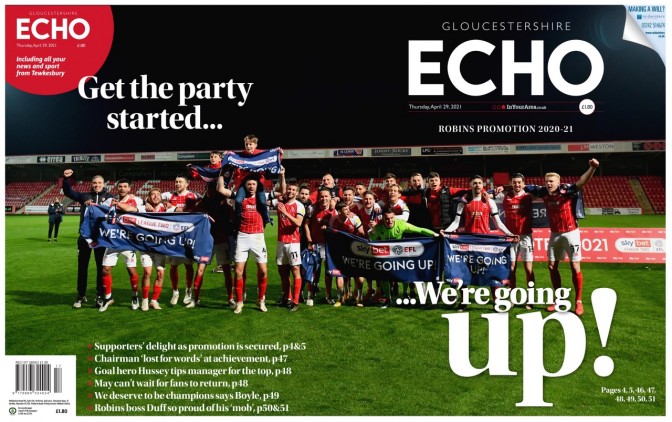 Echo senior sub-editor Mark Halliwell told HTFP: “With a deadline of Wednesday afternoon, we did have contingency plans in case they didn’t get the point required, and when Carlisle scored to take the lead it looked like we might have to use them – but Chris Hussey stepped up with the goal from a brilliant free-kick to clinch it.

“We cleared the back six pages and made space up front for the coverage and football writer Jon Palmer did a great job to turn round interviews with the chairman Andy Wilcox, manager Michael Duff and several players as well as a colour piece on the fans’ celebrations in time.

“Our print team, Dave Lewins, regional head of print, Will Doney, assistant head of print, and senior sub-editors Chris Rust and Joni Mann also played a big part in an edition I think we can be proud of.

“The pictures from PA and Getty were also superb with great shots of celebrations inside the ground after the final whistle and outside, where fans had gathered – socially distanced – and the players went out into the club car park to carry on the party out there.

“I put out a tweet on Wednesday to say that we would be doing special coverage and had several replies asking where people, some being exiled fans living abroad and others around the country, could order copies, and others saying they wanted to make sure they got a copy or several as a souvenir, so hopefully it has gone down well and we can get a sales lift from it.”

The coverage caps off what Mark called a “good few weeks” for Reach plc’s sports team in Gloucestershire after the Echo and its sister title The Citizen won the Outstanding Newspaper Coverage of Domestic Cricket award in the 2020 Domestic Cricket Journalism Awards, as covered by HTFP.