A weekly newspaper has launched a £25,000 bid to fix a hole in a nine-year-old girl’s heart.

The Hereford Times is campaigning to raise the funds to help Ava Bailey, whose parents have been told she needs open-heart surgery.

If they are unable to raise the cash, Ava will be put on an 18-month waiting list – facing exhaustion and missed school time due to her condition in the meantime.

The Times launched its campaign on its front page yesterday, pictured. 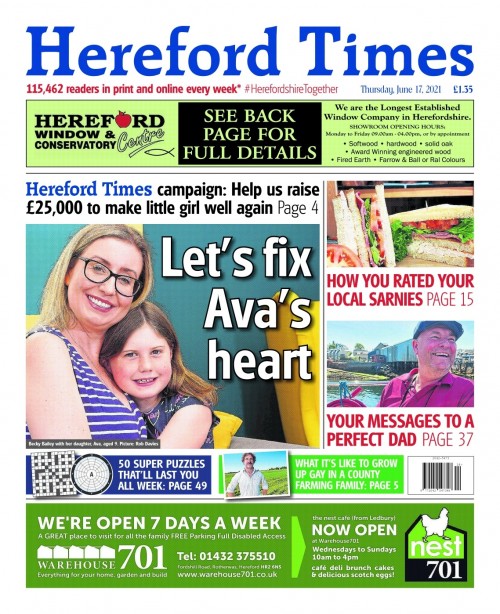 Ava’s mother Becky Bailey told the paper: “I try to talk to her, and I asked her if she was frightened or worried about anything, and she just said ‘No, they need to fix me now, mummy, so we can have a day out without me getting tired and out of breath’.

Editor John Wilson said: “It’s awful that a young girl like could miss a precious part of her childhood while she waits for an operation. Eighteen months is a long time when you are nine years old!

“The effects of the pandemic mean many of our readers are facing hardships of their own, but I feel certain of their generosity and willingness to support our Fix Ava’s Heart campaign.”

Donations to the appeal can be made here.