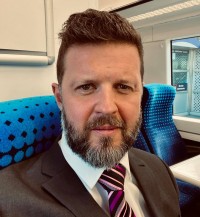 A regional title has unveiled its new editor as his predecessor prepares to leave next month.

Dalesman Publishing Company has unveiled Dan Clare as its new editor-in-chief, where he will be responsible for The Dalesman and Cumbria magazine.

Dan, pictured, is from a magazine publishing background and aims to “bring his family’s Yorkshire Dales farming roots and experience to this role”.

HTFP reported earlier this month how incumbent Dalesman editor Jon Stokoe had revealed he will be leaving the business on 24 September.

Adrian Braddy, who ran the publication prior to Jon taking over in 2019, said at the time he was “saddened and angered” by the move.

“He will take responsibility for editing our flagship monthly magazine titles The Dalesman and Cumbria magazine.

“Dan has a strong magazine based publishing background, and will also bring his family’s Yorkshire Dales farming roots and experience to this role.

“His love of the county, its countryside and its people is very strong, and will provide a basis for engaging with both existing and new readers alike.

“The Dalesman has been bringing interesting characters, humour and entertainment to its Yorkshire readers, here and worldwide, for more than 80 years, which Dan has every intention of continuing.”