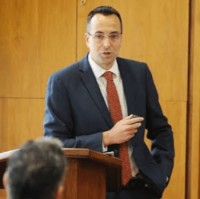 Regional publishers have begun recruiting a fresh round of reporters funded by Facebook.

HTFP reported last month how 29 journalists recruited through the NCTJ-administered Community News Project had since gone on to other roles in journalism since the scheme was launched in 2018.

Their departures have now left a number of vacancies in the newsrooms where they worked after the social media company injected a further £2.25m into the project to extend it for another year.

Martin Wright, editor-in-chief of the Express & Star and Shropshire Star, has now written for the NCTJ about how the scheme has affected the titles’ publisher, the Midland News Association.

Harriet Evans and James Vukmirovic, recruited by the MNA as part of the scheme, have now gone on to different, permanent roles with the publisher.

Martin, pictured, has revealed he has received more than 60 applications for the two new roles created as a result of Harriet and James moving to different positions.

He wrote: “The value of the project, in my eyes at least, is beyond doubt.

“Communities have been given a voice through local publishers, new journalistic talent has been unearthed – and our readers are getting an even better service.

“Those questions – perhaps doubts would be a more appropriate word – we had at the beginning of the project have been well and truly answered.”