Six weekly newspapers have been amalgamated and relaunched as a county-wide title.

JPIMedia has launched the Angus County Press as a 64-page paper to be edited by Mark Dowie, who has covered the county for the company for many years.

The County Press has been created from the merger of the Arbroath Herald, Brechin Advertiser, Guide & Gazette, Forfar Dispatch, Kirriemuir Herald and Montrose Review.

Each of the six titles’ mastheads will still appear above the County Press masthead on the front page and will appear inside the paper too. 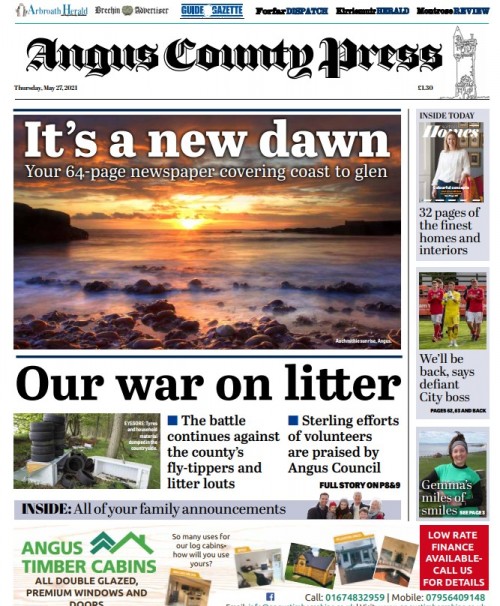 Each of the areas served by the former titles will also have their own section in the paper, which is named for the region’s former publishing company.

According to JPIMedia, the County Press has a “new design, much higher story count than the previous titles, more sport than before, new columnists and lifestyle content, and some returning favourites”.

The columnists include the historic Gable Ender column by local writer Forbes Inglis, a nautical column, lifestyle guru, local chefs and for the duration of Euro 2020, the former Scotland football manager Craig Brown.

JPIMedia core print and design editor Neil Pickford, who oversees the company’s Scottish weekly titles, said: “We have taken all the best content from our weekly titles across the county and added some great new elements to bring readers the best news and sport coverage from coast to glen – all in one place.

“The paper includes all the news and views people have come to expect from their town’s newspaper, plus much more from across the region.

“The Angus County Press may be a new newspaper, but it is a name with a long history in the region. We have been part of people’s lives in Angus for generations, but we haven’t stood still.

“We have changed with the times and strongly believe that we can offer readers what they need and want today, and in the future.

“The Angus County Press will be a strong voice for the community, speaking up for those who don’t have a voice or struggle to be heard.

“Our journalists are proud to have been able to keep readers informed and entertained for generations and hope they will join us on this latest chapter of our journey.”