A regional publisher has committed to giving paid sick leave to staff who lose a baby before 24 weeks of pregnancy.

JPIMedia has issued the pledge after one of its regional dailies, the Yorkshire Evening Post, launched a campaign urging businesses in the Leeds area to commit to a ‘pregnancy loss pledge’.

Any JPIMedia employee or their partner who suffers a miscarriage will now be eligible for a period of paid leave to support them in recovering from the physical and emotional consequences of their loss.

At present, there is no statutory entitlement to paid leave for people who lose a baby before 24 weeks of pregnancy.

From 24 weeks, when the loss of a baby is legally a stillbirth or neonatal death, mothers are entitled to full maternity leave and both parents are entitled to two weeks of paid parental bereavement leave.

The YEP’s campaign was launched on Monday’s front page, below, with an exclusive interview with former Leeds United and England footballer Nigel Martyn, whose wife Amanda had four miscarriages over the space of seven years. 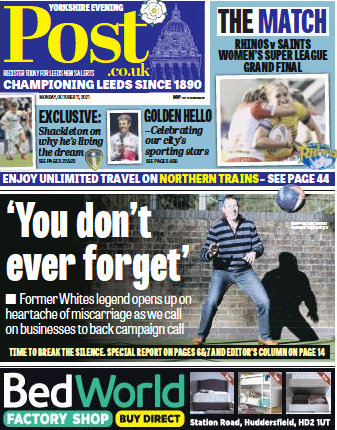 Said Laura: “Pregnancy loss can be a devastating experience whether it happens to you or your partner. We know that sadly it’s more common than people may think and that the challenges at work are often misunderstood.

“We want to help raise awareness and encourage businesses to take the pregnancy loss pledge so those affected can take the time off they need.”

Claire Jackson, head of HR at JPIMedia, added: “We know that there will be colleagues in the business who have been affected by this issue and, sadly, more who will experience loss in the future and so today marks our commitment to giving those affected as much support as possible.

“We believe that pregnancy loss, whenever or however it happens, is a bereavement and that providing support to staff members at such a devastating time is crucial.”