Editor opens up on miscarriage trauma in ‘hardest column ever written’

A regional daily editor has opened up on the two early miscarriages she has suffered in what she described as “one of the hardest columns I have ever written.”

Laura Collins, who edits the Yorkshire Evening Post, has gone public on her own experience with the subject and called for an end to the social “taboo” that surrounds it.

Laura’s decision to open up on the subject coincided with the YEP telling the story of Faye Dawson, a Leeds woman who had suffered the same trauma, on its front page on Monday, pictured below.

Laura described an accompanying editorial her own experience of suffering two early miscarriages, one of which occurred at the height of lockdown. 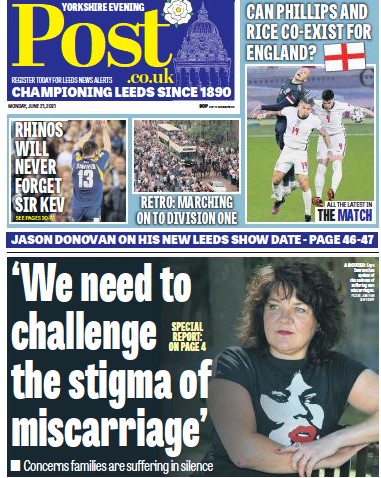 Wrote Laura: “Only my closest inner circle know that sadly I have had the trauma of two early miscarriages. Just a small handful of people even knew about my delight at seeing those two little lines.

“But sadly it wasn’t meant to be – my hopes for the future were quite literally flushed down the toilet.

“Women are told that they have to keep early pregnancy to themselves because of the risks of miscarriage so then followed a stream of awkward conversations about what had happened.

“I won’t gloss over it. Those conversations were awful and the worst part was this all happened during the height of lockdown.

“All I wanted was a hug from my mum and best friend and to be told that everything was going to be alright.

“Instead my husband and I had to find a way of dealing with this almost unspeakable grief on our own.”

Laura went on to state she was “eternally grateful” for her support network but called for society in general to discuss the subject of early miscarriage more.

She added: “I know I am not on my own as sadly one in four pregnancies end in miscarriage. But as a society we really need to open up and talk about this seemingly taboo issue.

“It has taken me a long time to open up about my experiences – and many more women will be suffering in silence or simply don’t want to talk and that too is fine.

“Early miscarriage is not spoken about enough and we have to start making strides to combat this. But beginning the conversation has to be a good starting point.”