A newspaper has declared war on fly-tipping “menaces” on its first day as a daily print title.

The Oldham Times has relaunched with a publication frequency of six-days-a-week this morning.

HTFP reported last month how the Newsquest-owned Times, which launched as a weekly in September 2017, was making the switch to give Oldham its first daily title since the demise of the Oldham Chronicle three years ago.

The new-look Times, which has a cover price of 70p, splashed this morning on its new campaign aimed at cracking down on fly-tipping in the town. 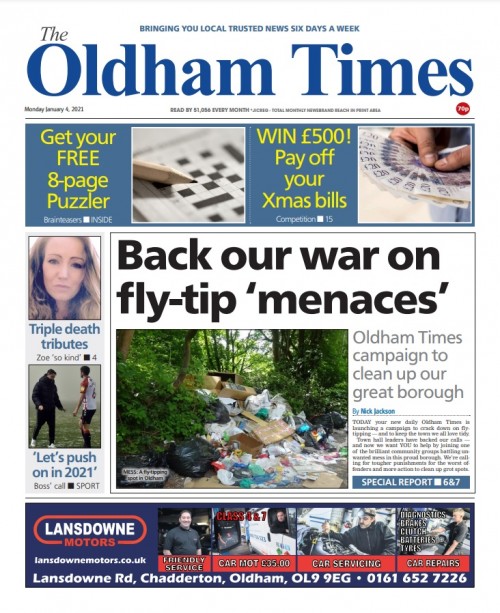 Introducing readers to the daily paper, editor Steve Thompson wrote: “We launched The Oldham Times as a weekly title just over three years ago when the town lost its only local paper.

“And since then, loyal readers have joined us in their thousands ­— both by buying the paper and by visiting our website.

“We see close to half a million page views online every month – and many more of you pick up a copy in store or have it delivered to your door.

“Now we’re bringing back a daily title – something a proud town like Oldham deserves.”

Steve also announced a number of new regular features which will appear in the Times each day.

The paper will publish a two-page special report each Monday “on the big issues” affecting its readership, as well as a free bumper ‘Puzzler’ pullout.

A Food and Drink feature will appear on Tuesdays, while Wednesday editions will contain an interiors guide called ‘Home’.

Thursdays will feature a nostalgia supplement called ‘Looking Back’, with ‘Motors’ and ‘Life & Style’ appearing on Fridays, while Saturdays will be a ‘good news’ edition of the Times and also include a seven-day TV guide.

Added Steve: “We hope you like the look and feel of the paper as much as we do. If there is anything you want to see more of in the Oldham Times then let us know.

“And if you want to get involved with our community news, you can contact our new community content editor Simone O’Kane. We look forward to hearing from you.”

The Times was launched by Newsquest in September 2017 after the Chronicle, the town’s previous daily paper, ceased publication when its parent company, Hirst, Kidd and Rennie Ltd, went into administration the month before.

The Chronicle has since been revived as an online-only title, with new owner Credible Media reiterating plans in October to return it to print.