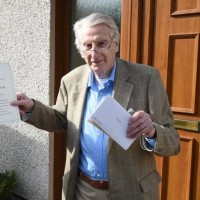 A journalist who marked seven decades in journalism earlier this year and was thought to be the UK’s oldest working reporter has died aged 88.

Tributes have been paid to Bert Houston, who covered courts, military issues and sport for titles including the Dumfries & Galloway Standard and Dumfries Courier, as well as various news agencies.

HTFP reported in March how Bert, pictured, had marked 70 years covering news and sport in the Dumfries area.

He was thought to be the oldest working reporter in Scotland – and possibly the UK too.

Galloway News editor Iain Pollock told the Daily Record: “Bert was a real character and we will miss him greatly.

“He was the consummate professional and enjoyed his work immensely.

“He refused to lie down to his illness and was determined to return to regular duties. Sadly that was denied him but he continued to contribute articles from his home on occasion.

“To have spent seven decades in the industry is remarkable. We will never see his like again.”

Bert, who died on 21 June, began his career at Dumfriesshire Newspapers and was one of the first reporters on the scene at the 1988 Lockerbie air disaster while with BBC Radio Cumbria.

He served as court reporter at Dumfries Sheriff Court and covered Dumfries football club Queen of the South for 70 years.

His press box colleague John Burgoyne said: “I remember one particular Saturday where he was covering a game for six different papers and three radio stations.

“He used to call me his cub reporter and I had that role for 30 years.

“It’s an experience I will treasure forever. Going to the football with him and meeting friends for life is a part of my life I’d have hated to have missed.

“He will be greatly missed.”