A working journalist aged 87 has celebrated seven decades in the industry – and revealed he has no plans to retire.

Bert Houston has marked 70 years covering news and sport in the Dumfries area, and is thought to be the oldest working reporter in Scotland – and possibly the UK too.

Bert, who was one of the first reporters on the scene at the 1988 Lockerbie air disaster while with BBC Radio Cumbria, has worked in more recent times covering courts, military issues and sport for titles including the Dumfries & Galloway Standard and Dumfries Courier, as well as various news agencies.

The Courier paid tribute to Bert on Friday by featuring his milestone on its front page, pictured below, as well as running a centre spread and dedicating part of its sports section to the landmark. 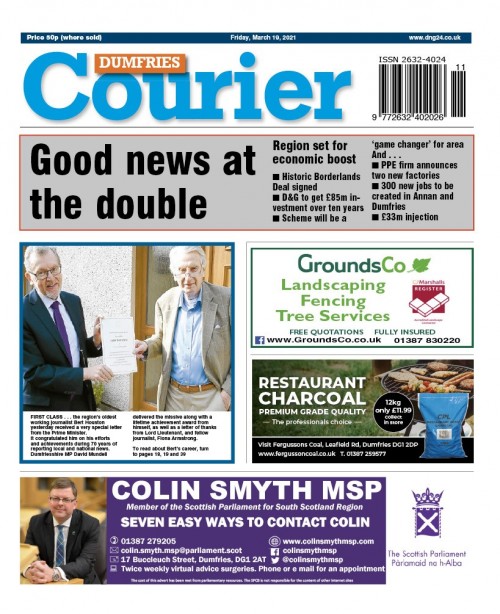 Speaking to the Standard, Bert said: said: “If I had to sum up my journalism career in one sentence – I was in a constant fight with the clock.

“My biggest piece of advice for any journalist is that there is a story in everything if you look hard enough.”

Bert has received a personal letter of acknowledgement from the Prime Minister, along with a lifetime achievement award, both presented by local MP David Mundell.

Fiona Reid, editor at Courier owner DNG Media, told HTFP: “In journalistic terms, Bert Houston is a proper legend – and it comes as no surprise to me that he continues to work well into his 80s and has as much of a nose for news now as he always has.

“These letters and awards are very well deserved and I am delighted that he has been recognised nationally for an outstanding career.”