It would be fair to say that Roger Lytollis is not your typical journalist.

He came into the industry almost by accident, never completed an NCTJ course, became a feature writer without having undergone the traditional grounding in news reporting, and spent all but a few short months of his career in a single newsroom.

On top of that, he confesses to being painfully shy and, perhaps most antithetically of all for a journalist, to not actually enjoying speaking to people.

But Roger Lytollis can write. As was not only proved over the course of a 24-year career in the regional press in which he won several awards, but also in this sparkling memoir of his time in the industry. 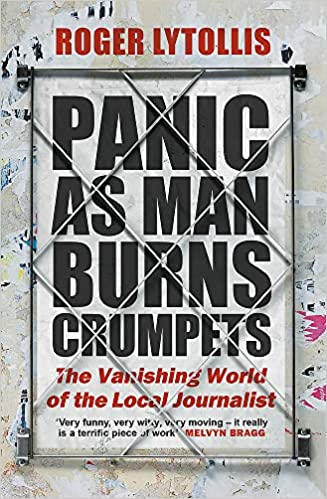 Apart from a brief interlude at the Edinburgh Evening News, Roger was employed for all of that time at the Carlisle News & Star and Cumberland News before being made redundant along with the rest of the features team at the end of 2019.

A three-times winner at the nationwide Regional Press Awards, he had less luck with awards schemes in his home region, being nominated no fewer than 11 times in the North West Media Awards before finally ending his losing streak in 2018.

The fact that Roger was able to make a joke of all this is typical of the self-deprecatory tone that runs through the book, and which sets it apart from the self-aggrandising tomes that more nationally renowned journalists regularly produce.

Little gems about the nature of life in a regional newsroom shine off nearly every page and, in the interests of letting Roger’s words speak for themselves, here are just a few of my own personal favourites.

Of course, the book is not all a barrel of laughs. Roger charts the last days of the old CN Group under the late Robin Burgess, the abrupt departure of Dave Helliwell as News & Star editor in 2017, the subsequent takeover by Newsquest, and the journalists’ strike in 2018 following another jobs cull.

It’s a story that has been told before – not least on this website – but few could have written about it as eloquently and humourously as Roger has done.

And he is smilarly open about the depression that has plagued him for much of his career and ruined his one attempt to discover what journalistic life was like beyond Cumbria during a five-month stint on the Evening News.

Roger was clearly full of regrets over this episode and later made an unsuccessful attempt to return to the Edinburgh title, noting wistfully: “Second time around I would definitely have made it work.”

Many books written by journalists have come across my desk over the course of my time as publisher of HTFP, but I would say without any hesitation that this one is the best.

Not only is it the funniest, and the best-written, it is also the most honest in terms of what it reveals about its author, and more importantly about our craft.