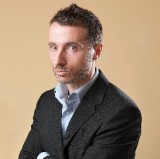 A feature writer has broken a losing streak stretching back nearly two decades after triumphing for the first time at the O2 Media Awards North West.

Before last night’s ceremony Roger Lytollis, who writes for the Cumberland News and Carlisle News & Star, had been nominated 11 times without taking home a trophy since first being shortlisted in 2000.

Such was Roger’s dismay that in 2016 he launched an appeal through HTFP in an attempt to find other journalists who could match his losing streak.

But last night Roger, pictured, finally managed to break his duck after triumphing in the Best Writer category in the ceremony at Chester Racecourse.

“I know there are more important things to worry about than awards, but I’ve waited a long time for this. It’s 18 years since I was first shortlisted.

“My colleagues said they were desperate for me to win and I’m sure they were, if only in the hope that it would stop me going on about all the times I’ve lost.”

Elsewhere, Blackpool daily The Gazette was awarded the Daily Newspaper prize, with the paper’s coverage of the death of footballer Jimmy Armfield, who also worked as a journalist for the title, highlighted by judges along with its “exemplary content and design.”

The Liverpool Echo and its sister Sunday Echo title scooped four awards, with the latter receiving the Weekly Newspaper prize.

A Social Media award named in honour of BBC presenter Rachael Bland, who died from breast cancer in September, was won by the North Wales Daily Post’s Sarah Hodgson.

Nicola Green, director of corporate affairs at O2, said: “We are honoured to keep Rachael’s spirit alive through the O2 Awards. She was an inspiration to so many people.