An editorial boss has written an open letter to Boris Johnson to share his frustration over what he sees as a lack of action since they met at Downing Street to discuss greater investment in his patch.

Bill Martin, marketplace publisher at Reach South, has written the letter to the PM over the “limited progress” that has been made since he travelled to Westminster to discuss the publisher’s ‘Back the Great South West’ business investment campaign.

Bill and business bosses from the region were invited to meet with Mr Johnson and his business advisor Andrew Griffith at Number 10 after he wrote to the PM about the campaign in August 2019.

In his fresh letter, Bill told Mr Johnson he had received “positive words of support from you and members of your Government” but said “limited progress” had been made since. 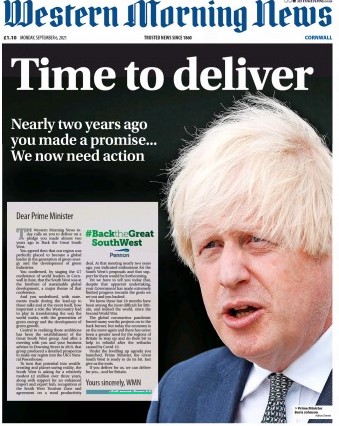 He added: “I am writing again to ask for your support in creating some impetus behind the region’s efforts.

“We completely understand the over-arching impact of the coronavirus pandemic, but any progress in our negotiations with your Government has been minimal, despite your oft-vocalised support for the region’s ambitions.

“This lack of progress does not chime with the spirit of your levelling up speech of 15 July this year in which you said: ‘There had got to be a catalytic role for Government.'”

The open letter provided a splash for the Western Morning News this morning, pictured above.

Bill wrote: “We maintain that the Great South West is a large and powerful economic entity that with the right support can become the cutting edge of your levelling up and net zero agenda with specific challenges and opportunities we are prepared to take head-on.

“Collaboration with other regions will be key, but the Great South West’s mission is clear.

“We have done all that was asked. I am writing today to ask for your support again in giving the Great South West the recognition and support that its unity and ambition require. We are a region that welcomes warm words, but desires positive action.”