Daily asks ‘Is that it?’ after Prime Minister’s investment speech

A regional daily has questioned the value of Boris Johnson’s ‘New Deal’ for its patch, calling for “concrete follow-up” as opposed to “warm words.”

The Western Morning News posted the question “Is that it?” on its front page after the Prime Minister’s announcement of plans to revive the country’s economy after the coronavirus crisis.

The Plymouth-based daily has campaigned for greater investment in its region in recent years under the banner of its #BacktheGreatSouthWest campaign.

The Heart of the South West local enterprise partnership has sent the government a £121m bid to fund a package of 63 “shovel ready” projects that will boost the local economy.

But the £900m set aside for such projects, if shared equally among the country’s 38 LEPs, would mean Devon and Somerset together would get only about £24m, according to the WMN’s Devon Live sister website.

The paper made reference to its ongoing campaign on its front page yesterday. 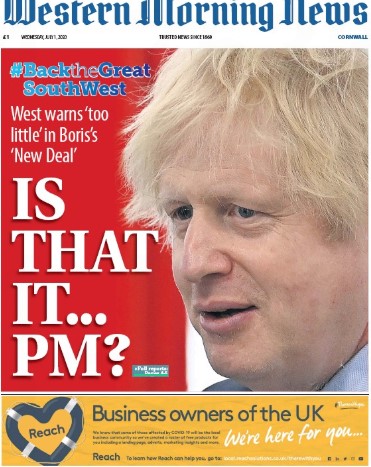 Editor in chief Bill Martin told HTFP: “The WMN has been running the campaign ever since the EU referendum, and one of the primary objectives was to ensure the Great South West, and all the opportunity it offers, was not forgotten by Westminster amid all the noise and distraction of Brexit.

“That still hasn’t gone away and the coronavirus crisis has meant the campaign for the region to be heard has become even more important.

“Back The Great South West has united the private and public sector, as well as the LEPs for the counties of Cornwall, Devon Somerset and Dorset.

“We have had a lot of warm words of support, including from the Prime Minister himself when the WMN led a delegation to Downing Street just before the last general election. What we have not seen is any concrete follow-up to the words and that seemed to be the case again following the Prime Minister’s New Deal speech.

“The front page displayed the WMN’s determination to keep campaigning for the region and to ensure it gets the infrastructure investment and support it deserves.”