An editor has hit back after Government ministers and other MPs publicly attacked his newspaper over an accurate story which they branded “false” and “dangerous”.

The Yorkshire Post came under attack from Tory MPs including Nadhim Zahawi, the Minister for Covid Vaccine Deployment, after the Leeds-based daily revealed supplies of the coronavirus vaccine could be diverted from its patch to regions that have failed to vaccinate as many people.

Mr Zahawi took to Twitter to claim the story, by Post journalist Robyn Vinter, was “wrong”, while other Yorkshire Conservative MPs – including Nigel Adams, Minister of State at Foreign, Commonwealth & Development Office – also attacked the paper for running the piece.

However, the Post was this morning vindicated after Dr Nikki Kanani, NHS England’s medical director of primary care, confirmed on BBC Radio 4’s Today programme that the diversion of vaccines was taking place. 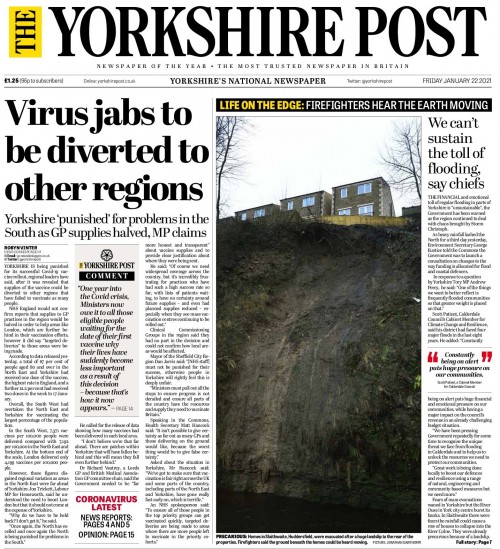 “We have less vaccine because supply remains a challenge. Yorkshire, as I said to local BBC tonight, will get its allocation to be able to meet the target of offering the most vulnerable 1-4 categories by mid February.”

In response, James said: “With respect, I don’t believe your percentages reflect what’s happening, and I trust my team more than I trust you.”

Mr Zahawi then accused him of resorting to “totally unnecessary” personal attacks, to which James replied: “We’ll keep on keeping on. You should, too. That I’m appalled by the diversion of vaccines from our region to others should not surprise you.

“Nor should you assume it supplants my appreciation of your amazing efforts. You know as well as I do, what’s happening is wrong.”

Mr Clarke claimed the story was “dangerous and wrong” and Mr Shelbrooke described it as a “false story”, while Mr Davies said it was “untrue” and Mr Adams called it “irresponsible and sad”.

In response to Mr Davies, who represents Shipley in Parliament, James wrote: “That someone like you, and all that you stand for, objects to our journalism gives me enormous encouragement. Thank you, Phil.”

Robyn also posted on Twitter to reveal she had spent 10 hours on the story and had sought comment from councils, Conservative MPs, the Department for Health and Social Care, Health Minister Matt Hancock and NHS England about the issue before publication.

She wrote this morning: “A lot of people have checked on me after Tory MPs tried to discredit a story last night.

“I suspect they were trying to instigate a pile-on but sadly for them I had about five notifications from people who went away when they actually read the story. So needless to say I’m fine.”

She added: “When you know your story is right and you’ve done everything you can to stand it up, it’s just annoying more than anything else to have to deal with this performative stuff.

“And just to add, if you ever publish anything that’s actually wrong, government press officers ring you at the speed of light, they don’t send fringe MPs to call you a liar on Twitter at 11pm.”

Discussing the story, James told HTFP: “I hope people saw it, and that it stirs something in them that compels them to subscribe. ”

HTFP has approached the Department for Health for a comment.