A regional daily has used its front page to call for a football manager’s sacking – saying his “time has run out”.

The East Anglian Daily Times wants Ipswich Town manager Paul Lambert to be replaced with a new boss after the team was beaten by promotion rivals Peterborough United.

Town were relegated to League One, English football’s third tier, in 2019 – a year after Mr Lambert took over the reins at the club.

The EADT splashed on its plea for a change to the club’s chairman Marcus Evans on Monday, pictured below. 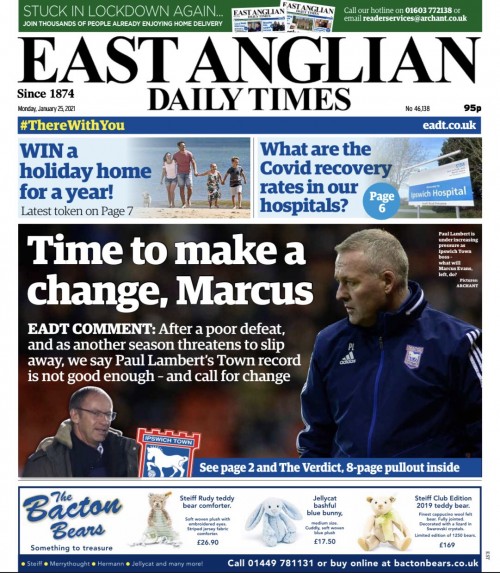 In an accompanying editorial, EADT editor Brad Jones said: “Some say we should have made this call sooner. It’s a fair question. We have discussed our editorial stance at length in recent weeks. Actually, we’ve agonised over it.

“We take our responsibility to be the voice of the fans seriously, in particular during this unique season when they can’t attend games.

“During these difficult times for the club, our coverage has remained measured, challenging and balanced. We have not wanted to make knee-jerk decisions, believing it was still possible – and wishing – for a change in fortunes.”

Brad went on to note it was his “understanding” Mr Lambert would be remaining in post for the time being.

But he added: “If that happens, we would be delighted to be proved wrong.

“But we can’t see it. And we don’t believe it will happen.

“We make the call for a new manager with a heavy heart. This is a wonderful football club, with a magnificent heritage and incredible fans.

“They deserve better, and to be excited about the club’s future.”

An Ipswich Town spokesman said: “While we are very disappointed that the EADT has taken this stance, we fully understand the frustrations of supporters with recent results.

“The performances and results of the opening stages of the season have not been mirrored over the last two months or so and the manager, staff and players are fully aware that there needs to be an improvement if we are to achieve the goal of promotion back to the Championship this year.

“Owner Marcus Evans has recently reiterated his support for the manager and with players now coming back from injury and the recent addition of Josh Harrop and Luke Thomas to add competition to the squad, he – and everyone at the club – remains fully behind the management and players in the challenge ahead.

“We are two points off the play-offs with games in hand on nearly all the clubs above us and we have not yet reached the halfway point in the season. There is a lot of football to be played yet, 75 points up for grabs in what is a very challenging season on many fronts.