A football boss whose sacking was called for by a regional daily has left the club he managed.

Paul Lambert has departed from Ipswich Town just a few weeks after the front page plea was issued by the East Anglian Daily Times.

At the time, the club stated they were “very disappointed” by the Ipswich-based EADT’s call, which came after Town were beaten by promotion rivals Peterborough United.

Mr Lambert left the club on Sunday night, providing a splash for the newspaper the following morning, pictured below. 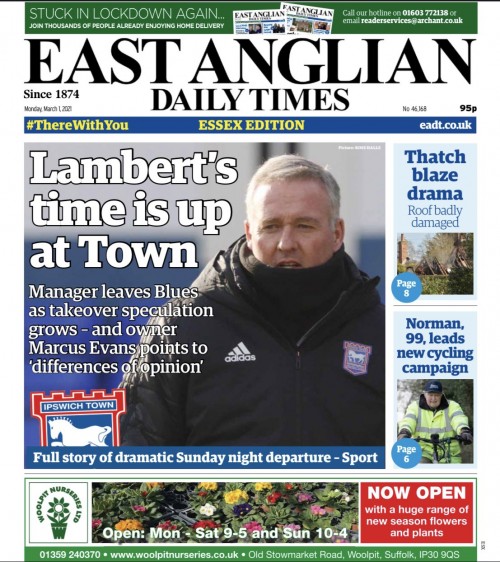 In an accompanying editorial, EADT Ipswich Town writer Andy Warren wrote: “You could feel the relief oozing from the Scot in recent days, speaking during interviews at a time when he clearly knew the end was near.

“And you could tell the pressures of the job were taking a toll on a man who suffered badly with coronavirus.

“The man who bounced into Suffolk and drove his side on ferociously from the touchline, dressed in his trademark Hugo Boss black jumper, has long since faded.

“He perhaps needed to move on for his own good, as well as the club’s. The fact the change has been made with enough time left on the clock for a late run at promotion should be seen as a positive, even if it feels overdue.”