A regional daily is set to go weekly after failing to reverse a circulation drop despite a decrease in its cover price.

The Wigan Post has announced the move, which will take effect from this Friday.

HTFP reported in February how the Post implemented a 25p price cut days after the Manchester Evening News launched an edition covering Wigan.

The price war put the cost of the JPIMedia-owned Post at 90p, in comparison with the 95p cost of the Reach-owned MEN’s Wigan edition. 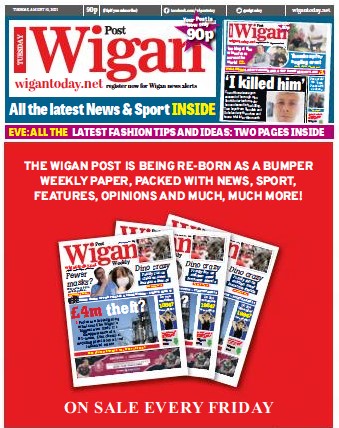 No jobs will be lost as a result of the change, JPIMedia has confirmed.

The announcement comes a week after the publisher revealed it is launching a new online-only title called Manchester World, which it says will cover Wigan.

According to ABC figures for January to December 2020, the most recent available, the Post’s circulation stood at 818.

The Post splashed on its publication frequency change this morning, vowing to be “re-born as a bumper weekly paper, packed with news, sport, features, opinions and much, much more”.

Gillian Parkinson, editorial director for JPIMedia North West, told HTFP: “We have given the daily title the best chance we could, but despite having reduced the cover price of Wigan Post at the beginning of the year, we have seen no increase in circulation.

“We are therefore changing Wigan Post in print from a daily newspaper to a weekly from this Friday and there will be no redundancies resulting from this process.

“We will continue updating wigantoday.net as often as we do now so our readers can benefit from the latest news 24/7 and we will have our sister website Manchester World covering Greater Manchester as well.

“The Wigan Observer will also continue to be published each Tuesday.”