A regional daily filled its front page with redacted emails to highlight a year-long Freedom of Information it is locked in with a local council.

Sheffield daily The Star has published the blacked out boxes and asked readers ‘What don’t they want you to know?’ after exposing what it called an “extraordinary cover-up of information” by Sheffield City Council.

The front page comes after an investigation by local democracy reporter Lucy Ashton, who 11 months ago asked the authority for correspondence regarding Sheffield City Trust, and its management arm Sheffield International Venues.

The Star had revealed last July that the council had used emergency powers to give £2.6m to Sheffield City Trust just days before announcing it was mothballing venues and considering redundancies. 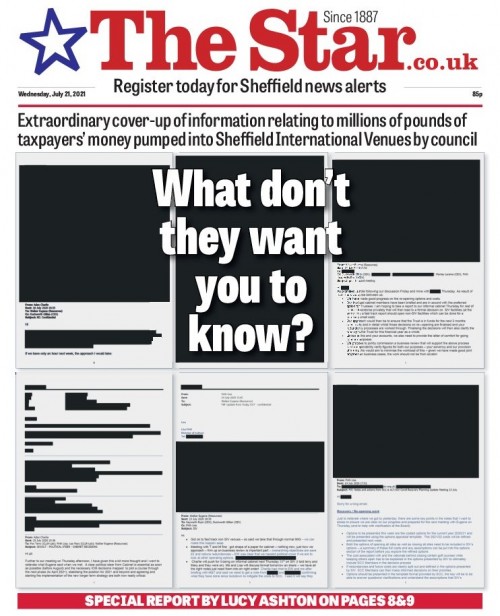 Lucy’s subsequent FoI focused on any correspondence which referred to staff redundancies, the closure of venues and grant aid from the authority over a four-month period.

In particular, she requested to see correspondence on the issue between a number of senior councillors, council officials and members of the SIV board of trustees.

But, in response, the council says the redacted response she received is because of either “commercially sensitive” or “legally privileged information”.

Other parts of the FOI, which was submitted in August 2020, still have not been returned and t council has “apologised sincerely” to The star for the delay and says there’s a significant backlog due to the pandemic.

Lucy told HTFP: “It took almost a year and lots of chasing to get the response to this FoI and there are still parts of it outstanding.

“The result was 22 emails, several of which were heavily redacted.

“It’s a classic example of why local democracy reporters are so vital and the importance of regional media in publishing these investigations.”

Council director Mark Gannon told The Star the council was “absolutely committed” to people’s right to know about its activities.

He said: “We strongly operate on a presumption in favour of disclosure.

“On occasion, there are strict reasons that apply to all public bodies, why we are not able to disclose information.

“We apply careful judgement on every request when making such decisions, whether that’s to protect people’s privacy or because of commercial interests, for example.

“This is always in line with and steered by the Freedom of Information Act.”