A regional daily has launched a front page bid to get its patch’s most well-known landmark repaired in time for its centenary.

Newcastle daily The Chronicle wants the Tyne Bridge to be restored by 2028 after years of “neglect”.

The bridge was last repainted in 2000, but the lifespan of the paintwork was 18 years and the newspaper says the landmark has been “in an increasingly poor state of repair for a number of years”.

Newcastle City Council has submitted an £18m bid to the UK Government’s Levelling Up Fund after applications for other funding packages failed to materialise. 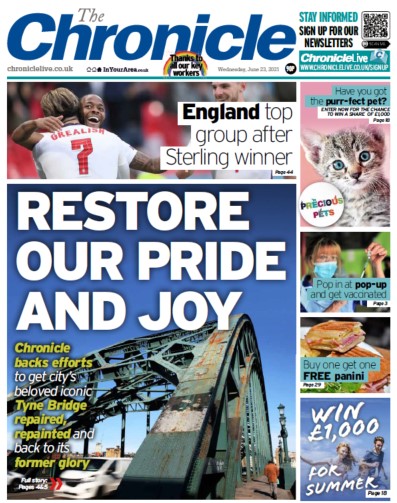 The Chronicle’s campaign, which it splashed on yesterday, has backed by politicians from around the North-East of England.

Chronicle audience and content director Helen Dalby said: “The state the Tyne Bridge is in is terrible to see.

“You can’t help feeling that if it had been 300 miles further south, it would have been repaired years ago.

“Anyone who has lived in Newcastle will know how important the Tyne Bridge is. It’s the thing you look for when you’ve been away and seeing it tells you you’re home.

“That’s why its neglect can’t go on any longer and the funding must be found to repair and restore it in time for its centenary.

“We’re proud to get behind our city’s leaders and back this bid to restore this icon of Newcastle to its former glory.”