Council bosses have warned they may have to close a historic landmark to most traffic if vital repairs for which a regional daily is campaigning are not undertaken.

HTFP covered last week how Newcastle daily The Chronicle wants the Tyne Bridge to be restored by 2028, the landmark’s centenary.

But the campaign’s launch has now also prompted Newcastle City Council leader Nick Forbes to claim the bridge could be reserved for buses only, with cars and other traffic banned from using it, if money to pay for its first round of major maintenance in two decades cannot be found.

Newcastle City Council has submitted an £18m bid to the UK Government’s Levelling Up Fund after applications for other funding packages failed to materialise. 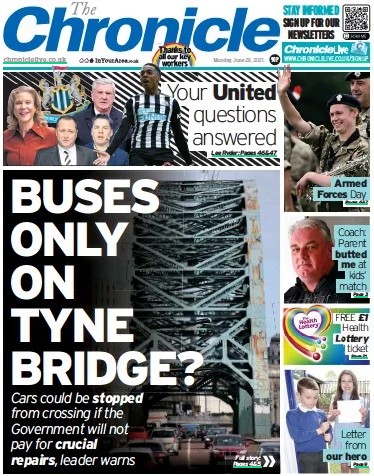 The revelation provided a splash for The Chronicle yesterday (28), pictured above.

Cllr Forbes told the BBC that not getting funding from the Government “in the next year or so” would mean having to “take the bridge out of action for cars and leave it for buses only” in the coming years.

Speaking to The Chronicle, a Newcastle City Council spokesperson said: “The Tyne Bridge is more than an iconic landmark of the North East, it is also a major gateway to and from the city, used by around 70,000 vehicles a day.

“As well as the sizeable task of painting the bridge, it also requires significant repair and restoration work. As part of our contingency planning, we need to look at options to reduce the load on the bridge if we don’t secure funding.

“However, these are worst case scenarios and we remain hopeful that we will secure this funding.”