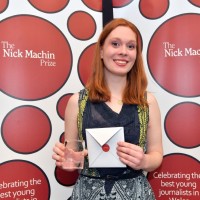 A young journalist’s investigation into attitudes to Brexit has won her an inaugural overall prize given in memory of a regional daily’s former news editor.

Anna Lewis, of Wales Online, has won the first Nick Machin Prize for young journalist of the year in a ceremony held in Cardiff on Thursday.

Anna, pictured, won the award, open to young journalists in Wales, for her study on Ebbw Vale, Wales’ most anti-Brexit town, and an investigation into the death of a woman who died after doctors missed a serious leg injury.

The awards were launched in memory of ex-South Wales Echo news editor Nick Machin, who passed away in August 2018, and was known for his relentless commitment to mentoring reporters at the beginning of their careers.

Other prizes to be given included outstanding story or feature by a young journalist, which was awarded to Anna’s Wales Online colleague Marcus Hughes for his personal account of losing his brother to schizophrenia.

Olivia Davies, of BBC Panorama won the prize for investigative journalism for her undercover investigation into abuse at the Whorlton Hall hospital for vulnerable adults in County Durham, which prompted a criminal investigation.

The lifetime achievement award was presented to David English, said to trained more active journalists than any other trainer in the industry during a career spanning four decades, most notably at Cardiff University’s journalism school.

The ceremony took place at Cardiff University’s school of journalism, media and culture, and featured memories of Nick alongside the five awards.

Paying tribute to his former Echo colleague, David James – now head of news at WalesOnline – told the audience: “The thing about Nick was that he loved news. He loved reporters who produced tightly-written copy packed with ages and times and colour that answered all his questions.

“He hated woolly copy that left him howling at missed questions, empty words or repetition.”

He added: “The principles he embodied by are the same ones we strive to follow today – and in that way he’s still with us, inspiring what we do every day.”

Presenting the award for young journalist of the year, Nick’s wife Sufia Shabani Machin praised his incredible heart and described him as a man who “truly, truly cared”.

She added: “I can’t help but be proud of Nick and I know he would be proud of all the young journalists here today.”