Weekly stands by COVID-19 whistleblower after criticism from health bosses

A weekly newspaper has stood by its decision to run a whistleblower’s account of alleged negligence relating to the coronavirus outbreak after criticism from hospital bosses.

The anonymous frontline medic at Basingstoke and North Hampshire Hospital came forward to the Basingstoke Gazette to reveal how a severely ill woman displaying symptoms of COVID-19 was incorrectly moved onto a ward with critically unwell women – in breach of NHS Trust guidelines.

The account was backed up by the relative of a patient being treated on the ward in question, and the hospital has not denied the incident took place.

But Hampshire Hospitals NHS Trust subsequently issued a public statement claiming the Gazette’s story contained “a number of inaccurate and unsubstantiated claims”, although it did not expand on what these were. 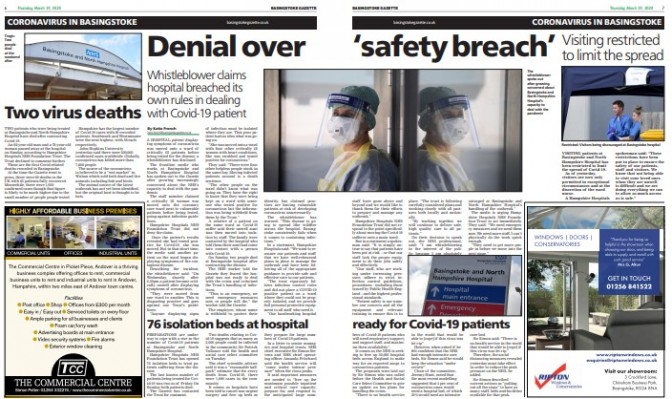 The Trust said: “The situation is very different to that reported in the paper and we want to reassure our patients and staff that we have well-rehearsed plans in place to manage the outbreak and have been following all of the appropriate guidance to provide safe and effective care to our patients.”

In response, the Gazette issued its own statement explaining how it had gathered and corroborated the story.

It said: “We note that the response from the Trust lacks detail to give confidence in their processes and does not actually deny or reject the whistleblower’s account.

“We stand by our decision to publish the account of the whistleblower.”

The initial story was published online, and the Gazette has now run the piece in print along with a response from the Trust, pictured above.

Gazette editor Katie French has praised the whistelblower for coming forward to their local paper.

Katie, who also edits the Andover Advertiser, said: “In times of crisis, people turn to news sources they can trust. At both the Gazette and the Advertiser, this has been reflected in our growth in audience.

“We have also seen a spike in the number of people turning to us to tell us what is going on in their industries, behind closed doors. It is a compliment of the highest degree when a whistleblower trusts you and your publication to tell their story.

“In this case, the individual spoke out at great risk because they wanted to highlight a major failing. Following our coverage, measures have been introduced to tighten patient safety which can only be a good thing.”