Two sister weeklies have launched a campaign to save a “competitor” radio station from being forced to undergo a national rebrand.

The Chichester Observer and Bognor Regis Observer are calling on readers to help save Sussex’s Spirit FM from being absorbed into Bauer Media’s ‘Greatest Hits Radio’ brand.

HTFP previously reported how Spirit FM was among 49 of Bauer’s recently-acquired stations across the country set to undergo the change as part of a shake-up which could see up to 160 jobs lost – although it is understood journalism roles will not be among those at risk.

The Observers splashed on the campaign’s launch on Thursday. 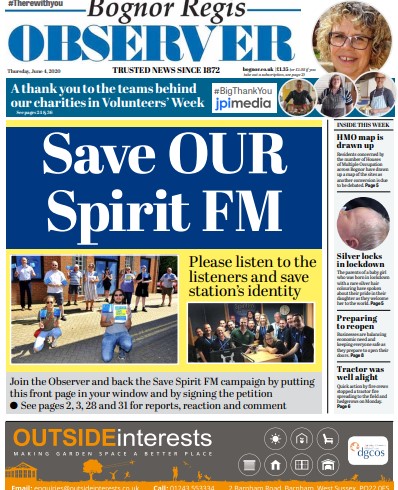 Editor Gary Shipton wrote in an accompanying editorial: “It is true that they chase the same advertising pounds on which our own trusted journalism also depends. So from that very narrow perspective they could be regarded as competitors.

“But the Observer, more than 130 years old, has always put the communities it serves first. Over the years, Spirit FM speaking through the cheery and reassuring voices of its much loved presenters has done the same.

“We salute them for it. In so doing, they have won a place in the affections of the entire local community.

“I rarely comment on other media. It has always seemed to me to be bad form to talk down a competitor.

“But neither I nor the Observer – with which I have had the privilege to be associated for nearly 40 years – will stand by and let this marvellous radio station nor its brilliant team of managers, journalists, presenters and staff face an uncertain future without putting up a fight.”

Radio Today estimated that the current total of approximately 200 on air presenting roles across the stations will be cut to around 40.

But HTFP understands that journalism roles at the affected stations – including news presenter and reporter posts – will not be among those under threat as a direct result of the move.

Speaking to HTFP, Gary said: “Many residents are furious that their favourite local radio station Spirit FM faces major changes – including a complete rebranding – following its acquisition by Bauer Media.

“The Observer, which always campaigns vigorously on issues important to the communities we serve, is proud to once again be reflecting their concerns in our newspaper, on our website, and on social platforms.

“Our trusted, independent journalism has never been more important – especially when it is supporting a radio station which a generation ago might have been seen as a commercial rival.”