A photographer who covered a school fire has donated the profits from his pictures of the disaster to help teachers and pupils.

Gareth Easton captured haunting images of firefighters tackling the blaze at Peebles High School, which subsequently appeared in titles including The Scotsman and the Daily Record.

Gareth’s children attend the school, and the freelance decided to use the revenue raised from his photos to help it invest in equipment lost to the blaze.

His donation has funded the purchase of a new Canon Digital SLR camera for pupils to use. 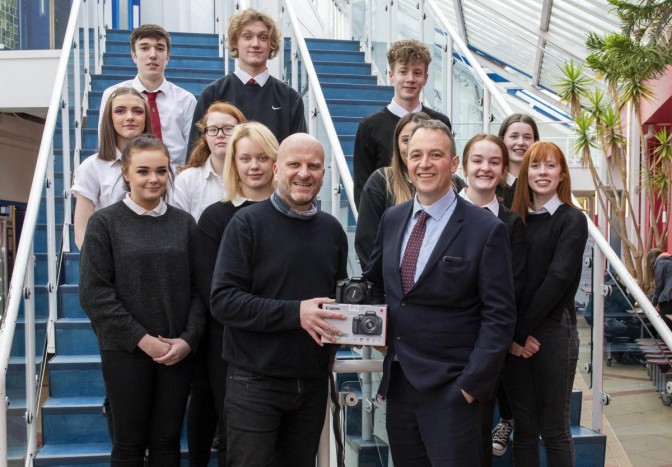 Gareth, pictured left holding the camera, donates the new equipment to the school

Gareth told the Border Telegraph: “My daughter Olivia is in 5th year and is presently studying for her Higher photography.

“She was clearly affected by the fire and distraught by the damage the fire had caused to the Art department and the loss of the school’s valuable photography equipment.”

He added: “I decided that I would use the revenue generated from the publication of my images of the fire to the benefit of Peebles High School. The community spirit in Peebles and the wider Tweed Valley has been impressive since the fire.

“It’s an absolute pleasure to be able to fund the purchase of a new Canon Digital SLR camera and present it to the school.

“I hope it goes a small way to assisting the present and future photography and art students at Peebles High School in completing their coursework and moving onto greater things.”