Nurses hit with parking fines totalling hundreds of pounds have had them rescinded thanks to the intervention of a regional daily.

NHS staff working at Sheffield’s Royal Hallamshire Hospital got in touch with the Star, the city’s daily newspaper, after discovering the fines on their vehicles at nearby pub The Francis Newton.

The staff had been told they could park at the currently empty pub, part of the J.D. Wetherspoon chain, but found a private parking company had enforced penalties upon them.

But after The Star’s local democracy reporter Lucy Ashton intervened, Wetherspoon said it would take action to cancel the fines immediately. 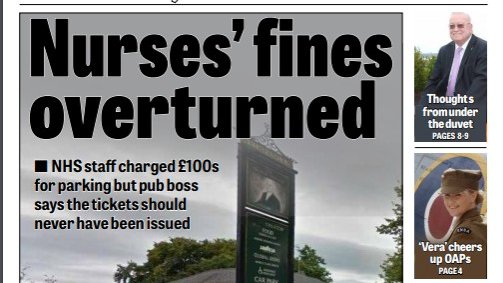 Posting on Twitter, Lucy cited the story as proof of the importance of local media.

She wrote: “If you’re wondering why we still need the local media, here’s a little example.

“I met a nurse today who told me NHS staff were being fined hundreds of pounds in parking charges and asked if I would do a story.

“I did – and all the fees have been immediately cancelled.”

Lucy told HTFP: “By bringing issues like this to the public’s attention, newspapers can have an immediate effect and local journalists have the power to help people.

“Newspapers are still doing what they have always done – using objective journalism to shine a light on issues and hold the powerful to account.

“People still turn to the local media when they need help and we’ll always be there for them.”

Wetherspoon said the nurses “categorically” should not have been fined and any tickets sent out will be cancelled.

Eddie Gershon, for the firm, told The Star: “NHS workers can park in our pub car park free of charge. They categorically should not be fined and any tickets that have been sent out will be cancelled.

“The parking tickets have not come from Wetherspoon. A total of 92 NHS staff have used the free parking facility so far and Wetherspoon will continue to offer this facility to them.”