A new newspaper has been launched to serve a community which lost its local independent title four months ago.

The Weardale Community News was published for the first time on Friday, having been founded following the demise of the Weardale Gazette.

HTFP reported in December how paid-for fortnightly the Gazette had closed with the loss of three jobs after 33 years in business.

As a result, the Weardale Community News Group CIC was founded with a view to reviving a print publication serving the same areas of County Durham as  its predecessor. 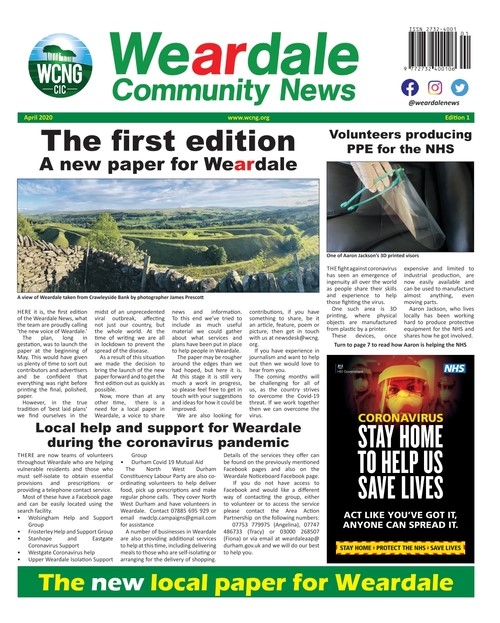 It is intended that the free monthly will be distributed to the majority of homes in the area, but the first edition is only available in local shops due to the coronavirus outbreak.

Among those involved is former Gazette sub-editor and layout designer Paul Turton, who also worked on the Worcester News between 2001 and 2004.

Paul told HTFP: “The paper has been sorely missed in the area and discussions about launching a new title have been ongoing since the closure.

“A team was formed to look into how a new paper could be launched to once again provide Weardale with its own news outlet.

“Eventually a company, the Weardale Community News Group CIC, was set up, a social media presence established and sources contacted and new the paper finally began to take shape.”

The first edition consists of 16 pages, and it is hoped what’s on and sports sections will be added to the paper when appropriate.

Advertising has been provided without charge in the inaugural issue to support local businesses during the COVID-19 lockdown.

Paul added: “Unfortunately, the emergence of COVID-19, subsequent pandemic and lockdown have presented a number of new challenges to the team. However, the decision was made to press ahead with the launch.

“Rather than door-to-door delivery, the first edition is available from local shops, where retailers, such as the Co-op have agreed to stock it.

“The team looks forward to carrying on Weardale’s tradition of independent local journalism.”