A local newspaper has closed with the loss of three jobs amid “falling circulation and shrinking advertising revenues”.

The Weardale Gazette announced its closure after almost 33 years in business as an independent venture.

The move comes after Anita Atkinson, the newspaper’s longest-serving editor, stepped down a few weeks ago.

In a post on the Gazette’s official Facebook page, the company said it had recent been exploring alternative avenues of funding, but nothing had “proven to be a viable option” to secure its future. 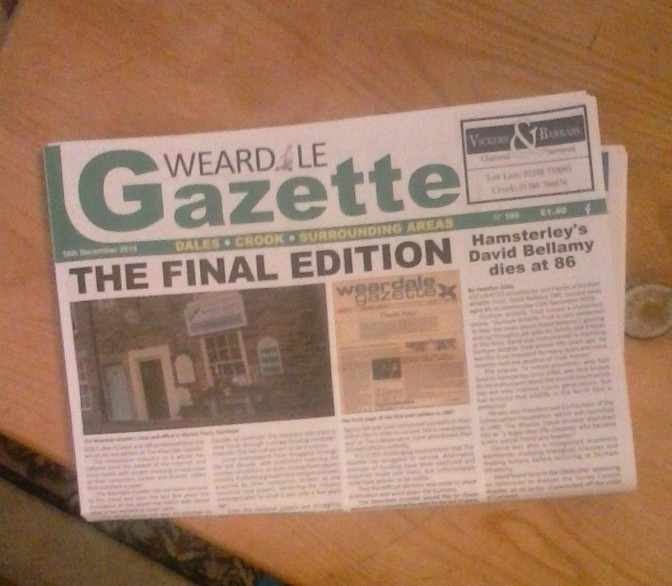 The post states: “This situation has arisen because of steadily falling circulation and shrinking advertising revenues. As people have turned to online sources, hundreds of newspaper titles in the country have disappeared in the last few years.

“It seems that people now prefer to get their local information from websites, or social media, rather than traditional sources and new generations simply don’t read newspapers.

“Consequently, the Gazette has been losing money for a long time and if we continued to publish past December 2019 we would run out of funds to pay our creditors and be declared insolvent.

“Whilst a private company, The Gazette has always been a social enterprise, with any funds put back into the business, but at this point we are no longer able to break even, and struggle to cover the costs of production and pay staff (the directors of The Weardale Gazette are volunteers and do not receive any payment from the company).

“Put simply, we can no longer afford to keep publishing The Weardale Gazette.”

A crowdfunding campaign aimed at saving the fortnightly Gazette, based in Stanhope, County Durham, had been set up but was later cancelled.

Contributors were refunded ahead of the decision being made to cease publication.

The post adds: “When Anita resigned from her position as editor we were all optimistic that we could continue the paper without her and try to broaden its appeal to new readers. Everyone involved with the Gazette came up with some excellent suggestions and we were able to put together a long list of potential sources and column ideas.

“Unfortunately, given a careful and professional analysis of the figures, combined with a well documented declining market, we were left with little choice but to make the difficult decision to stop printing.

“It is a shame that after almost 33 years of continuous publishing The Weardale Gazette will be closing. Another Weardale business has had to close with the loss of three more local jobs.

“Local newspapers are vital to society, especially rural areas like Weardale. It was not a decision that has been made easily by the directors, some of whom have supported the paper from it’s inception in 1987.”