A regional daily’s moving page one tribute to the two victims of the London Bridge attacks in November 2019 has been named the best front page of the past 12 months.

Jack Merritt, 25, and Saskia Jones, 23, were stabbed to death by Usman Khan at a prisoner rehabilitation conference in London organised by the University of Cambridge.

The Cambridge News devoted the first 11 pages of its Monday 2 December edition to coverage of the attacks which had taken place the previous Friday.

Its front page, headlined ‘They tried to make the world a better place’ was named Daily Newspaper Front Page of the Year in the Regional Press Awards announced earlier today. 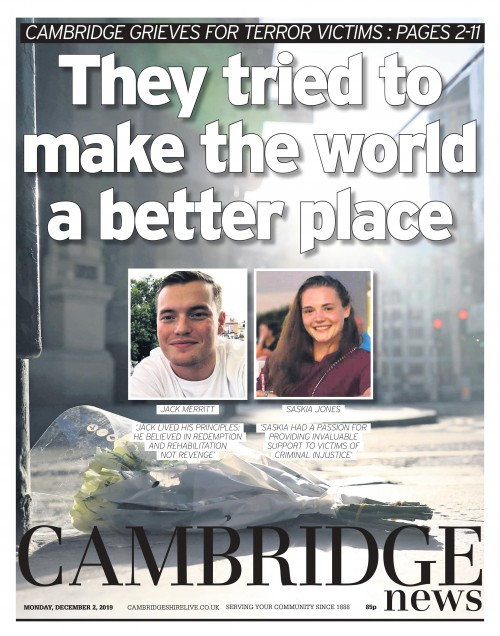 In their citation the judges described the News’ front page as “a moving and effective way to capture the grief of a city after a shocking event.”

“This front page sets a template for all others to follow. It delivers a message of loss with the utmost dignity and respect for those who have died. It makes great use of text and imagery to make a real impression on the reader and do grieving families proud too,” they added.

Commenting on the award on Twitter, News editor David Bartlett said: “The team and I are totally humbled by these comments from the judges in this recognition from @EditorsUK.

“It is a harrowing tragedy, which we tried our best to cover with dignity and respect like the judges say.”

Highly commended in the same category was The Scotsman for its splash on the devastating fire at Paris’s Notre Dame Cathedral, headlined ‘La Tragedie de Notre Dame.’

The judges said: “A front page that combined elegance and emotion to make a story that had been playing across all media for many hours feel entirely fresh. A simple but highly effective front page. Brilliantly executed.”

In the Weekly Newspaper Front Page of the Year category, the Herald on Sunday triumphed for its Trainspotting-themed front page ‘Choose Something’ urging dithering Westminster politicians to resolve the Brexit impasse.

The judges said: “There’s a real sense of anger and frustration pouring off this typographically elegant splash. It reflects a nation inwardly screaming. A bold way to reflect the nation’s frustration.”

Highly commended was Sunday Life for a dramatic front page published in the wake of the murder of journalist Lyra McKee last year which judges said “reflected readers’ anger.”

Both the front page categories were sponsored this year by HoldtheFrontPage. 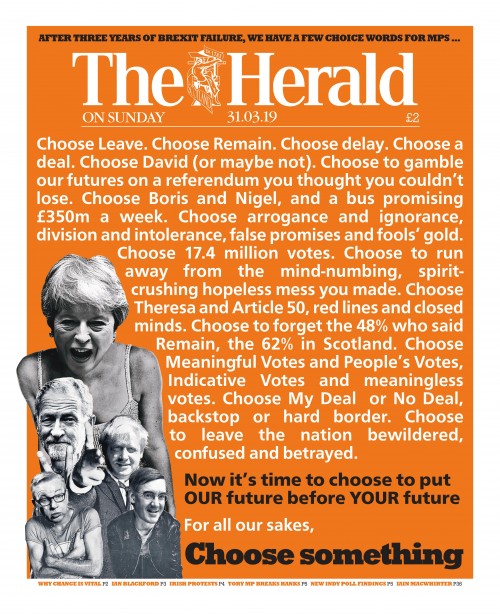