Man jailed for 20 weeks after threatening to rape “terrified” reporter 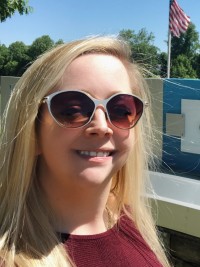 A man previously convicted of threatening to blow up a hospital has been jailed for 20 weeks after a rape threat against the reporter who covered the case.

Appearing for sentencing yesterday, McCarthy was jailed for 20 weeks and handed a 12 month restraining order preventing him from contacting Amy.

He was also ordered to pay £61 compensation to Amy, who said in a victim impact statement that she had been “terrified” by the threat.

McCarthy, who also uses the name Abdullah Mahmood since converting to Islam, was previously jailed for 18 weeks in October 2017 after making a number of violent statements on his Facebook page.

They included threatening to blow up Furness General Hospital, in Barrow.

Amy, pictured, said in her victim impact statement:  “As a local newspaper reporter I have, over the last two years, been subjected to a significant amount of abusive comments simply for doing my job.

“Most of this has been directed towards me because I regularly cover court cases and that is the only reason I can think of to explain why the defendant threatened me in the way that he did.

“I have never met him; or even spoken to him, and it has been more than 12 months since I last reported on his convictions for malicious communications offences in which he threatened to blow up our local hospital.

“Any court reporter knows that what you write will often be a source of criticism and vilification but when I saw the defendant’s threat and comment about me I am not exaggerating when I say that I was truly terrified.

“Knowing that he is someone who the courts and Probation Service have identified as a dangerous offender, and knowing, in detail, the nature and seriousness of his previous convictions, I genuinely believed he intended to carry out his threat and I was so frightened I was unable to leave my home, or carry out my job as I normally would, for a number of days.

“I didn’t know where he was currently living until he was arrested and so I was terrified that he might be living close by.

“The thought of someone threatening to rape me was horrible and I didn’t feel safe.

“I would like the defendant to be made aware of the impact his threat had on my life and how frightened I was in thinking that he wanted, and intended, to rape me.”

Following the sentencing hearing, Amy told HTFP: “For far too long reporters have been subjected to vile comments and threats simply for doing their job.

“No journalist is taught to expect this, or even warned about it, as part of any accredited qualification or course and yet this is something which is becoming increasingly – and alarmingly, common.

“But we shouldn’t have to expect this – nor should we be prepared to accept it.

“When I saw Leroy’s threat – and in the context of the persistent harassment I have had to endure – including that which has come from those I considered to be my closest friends, I decided that enough was enough.

“What he did strayed far beyond the criticism we might expect given the nature of our job. What he did was criminal and I have no doubt that countless other reporters have been subjected to equally criminal comments and threats and thought to themselves “this just comes with the territory”.

“This has got to stop. Something needs to be done to protect and preserve our ability to report on issues in the public interest, including court cases.

“If nothing changes then it will effectively be another, understandable, reason why anyone considering a career in journalism will choose another profession. And, let’s face it, our industry has enough obstacles to overcome as it is.

“But there is hope. And the sentence handed to Leroy McCarthy does give us some hope. The prospect of being jailed for threatening a reporter should act as a shot across the bows for any trolls or keyboard warriors who see us as ‘fair game’.

“But in order for things to change, and in order for these vile, pathetic losers to appreciate the consequences of their actions, as reporters we need to report to the police when we feel threatened, intimidated or frightened.

“I just hope that my own experience helps to encourage other reporters to recognise when a line has been crossed and to give them the confidence to report anything which goes too far. “