Island daily demands ‘lock down’ of patch in line with UK

An island daily has called for its patch be “locked down” and a raft of other tougher measures introduced to combat the coronavirus spread.

The Jersey Evening Post launched a front page call for action yesterday, demanding changes which would bring the island’s approach to tackling COVID-19 more into line with the mainland United Kingdom and other countries.

The JEP listed five demands, one of which called for “tougher measures” and said it was “time to lock down”.

The newspaper also called for Jersey’s chief minister to issue a daily briefing, a plan to be drawn up on how the most vulnerable on the island will be supported, an explanation on why the current policy differs from those of its near neighbours and transparency over the financial resources available. 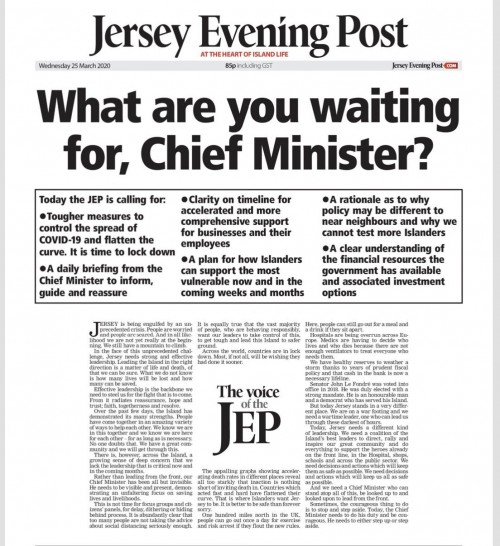 An accompanying editorial reads: “Jersey is being engulfed by an unprecedented crisis. People are worried and people are scared. And in all likelihood we are not yet really at the beginning. We still have a mountain to climb.

“In the face of this unprecedented challenge, Jersey need strong and effective leadership. Leading the island in the right direction is a matter of life and death, of that we can be sure. What we do not know is how many lives will be lost and how many can be saved.”

It added: “One hundred miles north in the UK, people can go out once a day for exercise and risk arrest if they flout the new rules. Here, people can still go out for a meal and a drink if they sit apart.”

The JEP then called on chief minister John Le Fondré to “either step up or step aside”.

Mr Le Fondré said on Tuesday: “We do not yet need to go to UK measures at this time.

“Self-isolation is a tool in our armour, one of a number and we will only deploy it when the time is right, at this time going to the full measures of the UK is not the right time based on the profile of Jersey.”