An independent newspaper has backed regional press calls for a sports star from its patch to be knighted.

HTFP reported last week how the Yorkshire Evening Post had called for the Oldham-born former Leeds Rhinos rugby league player to be knighted for his efforts.

Former Leeds Rhinos rugby league player Mr Sinfield, nicknamed ‘Sir Kev’, was inspired to take on the challenge in honour of ex-teammate Rob Burrow, who was diagnosed with the disease last year. 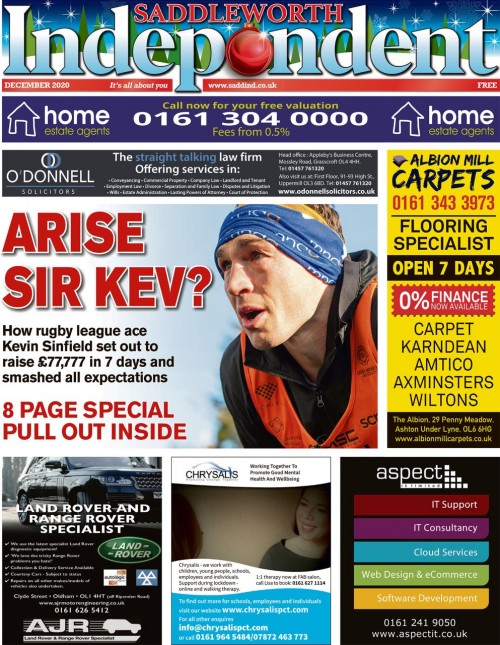 The call was backed on the Independent’s front page for December 2020, pictured, which featured the headline ‘Arise Sir Kev?’

The edition and pull-out was pulled together by the paper in just over a day, with a congratulatory full-page advert from Betfred, title sponsors of rugby league’s Super League, also appearing.

Aimee Howarth, editor-in-chief of the Independent and the Local Communications stable of titles, said: “It was a great team effort. I don’t think any of us expected the story to become as big and as significant as it eventually became.

“When it did then we felt duty bound to ensure our coverage did justice to Kevin’s remarkable feat. We are fortunate-for a relatively small community-to be part of a lively and varied news area.

“However, a story of such magnitude, doesn’t drop in your lap too often. Reporter Gary Carter has enjoyed a long-standing working relationship with Kevin and has a great contacts book when it comes to rugby league.

“Gemma Carter worked tirelessly to update our website plus Facebook, Twitter and Instagram accounts-all of which showed notable increases. Then it was down to designer Steve Hodgkiss to pull our supplement together which he did superbly.

“Saddleworth is fiercely proud of its own. So, we hope the Independent’s coverage goes some way to showing off all that’s good about its residents and the area.”