An ice-cream man having his licence revoked prompted a regional daily to run a hip hop-inspired front page.

The Oxford Mail ran with the headline ‘I got 99 problems ‘cos my pitch is gone’ after local democracy reporter David Lynch covered an Oxford City Council licensing hearing.

At the meeting, councillors stripped frozen treats vendor Shakeel Iqbal of his licence over complaints about him parking on double yellow lines outside a school.

The story provided a splash for the Mail, with the headline by audience and content editor Marc Evan parodying the lyrics of Jaz-Z’s 2004 single ’99 problems’. 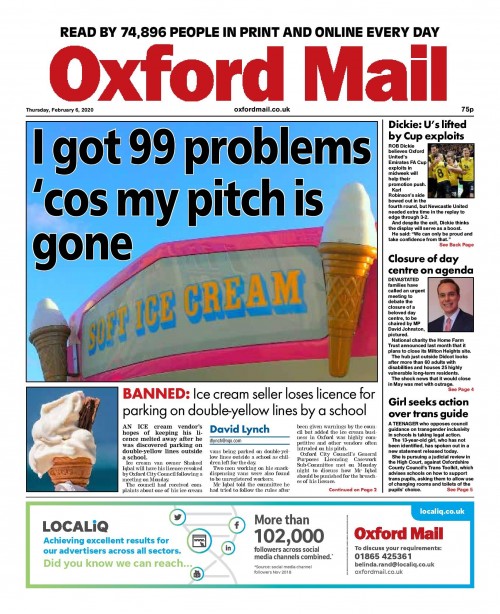 In the song, the New York rapper states: “If you’re having girl problems I feel bad for you son, I got ninety-nine problems but a bitch ain’t one.”

Marc told HTFP: “First of all, it’s a great story spotted by our local democracy reporter David Lynch (from what was an otherwise dull licensing committee meeting), and deputy news editor Pete Hughes got very excited about it. It’s got those classic local newspaper ingredients.

“Some headlines you can agonise over for ages, but this one came to me pretty much the moment I saw the story on the newslist. It was just a case of tinkering with it to make it fit. There was a lot of positive reaction to it in the office when I slapped it on the page, so I was confident I was on the right side of the line between playfulness and self-indulgence.

“I can’t say I’m a massive Jay-Z fan (when it comes to hip-hop, I’m more Old School), but I think the song is sufficiently well-known to work. More so than when I used Public Enemy’s ‘Rebel Without a Pause’ on the front page of the Witney Gazette last year.

“The reaction on Twitter so far has been very nice – it’s good to know that old-fashioned sub-editing skills are still appreciated in these trying times for print. Plenty of editors would have rejected it, so I’m lucky that Samantha Harman loved it instantly and let me run with it.

“Headlines that play around with song titles have always been my favourite kind. I’m not sure mine is quite up there with ‘Super Cally go Ballistic Celtic are Atrocious’ or another Sun classic (when Frank Sinatra was given sheep hormone implants) ‘I got ewe under my skin’, but I am pretty pleased with it.”