HTFP at 20: It’s a privilege to report on what my fellow journalists are doing 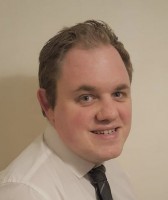 HoldtheFrontPage reporter David Sharman, pictured, has worked for the site since October 2014.

Here, as part of our HTFP at 20 series of pieces to mark our 20th anniversary, he shares his thoughts on why it remains essential reading for all journalists.

I’m not sure many prospective journalists think one day they’ll end up reporting on what their fellow journalists are doing.

It certainly never occurred to me when I became inspired after winning a Harborough Mail ‘Young Reporters’ prize at the age of 10 for my report on a ‘Dads v Lads’ school football match (which basically amounted to a 200-word defamation of my own father for his performance on the pitch).

Or when I was struggling a decade later to get to grips with various Teeline outlines while studying for my NCTJ prelims. Or 12 months on from that when I began my first paid job as a full-time freelance on the Leicester Mercury.

And yet, here I am at HoldtheFrontPage. Reporting on what my fellow journalists are doing. And, if I may be frank, it’s been an absolute privilege to do so for a quarter of this website’s existence.

It’s been a privilege to spend the last five years telling the stories of regional journalists across the UK who are doing vital work which would often otherwise go unrecognised beyond their own newsrooms.

Every day reporters, photographers and editors are fighting campaigns which make a difference on their own patches and beyond, scrutinising government at all levels and challenging unjust court reporting restrictions to ensure justice is seen to be done in the eyes of the British public.

And they’re doing all of this against an ever-growing backdrop of abuse and intimidation from hostile agents in what is often termed the ‘Wild West’ of social media.

I’ve also had to report on that, all too frequently in recent times, as journalists become easy targets for those who simply can’t handle being told the truth by people working for the good of their community.

That’s not a part of the job I enjoy at all. But it’s necessary because people need to know that reporters acting with the most honorable of intentions are being threatened with such heinous acts as rape and murder, purely for daring to serve the localities in which they live and work.

Put simply, HoldtheFrontPage is important because it has, for the past two decades, helped journalists facing such trials realise they’re not alone.

It doesn’t matter whether your patch is in the city or the countryside, in Cornwall or Caithness, we can all relate to the frustration of someone having to deal with a magistrate who doesn’t quite know the law as well as anyone who’s studied McNae’s does.

Equally, we can all relate to the elation felt when a council performs a U-turn due to a campaign fought by the local press. We’ll always strive to cover as many of examples of both such scenarios as we can.

It’s also important because without HTFP’s jobs board, many of us wouldn’t be working in the roles we are today.

I certainly wouldn’t, for obvious reasons, but neither would I have landed my first staff job – at The Gazette, in Blackpool – where I ended up after applying via an advert placed on this site.

I’ll wind things up now before I get too mawkish about the role HTFP has played in my own career development, although I do mean it when I say I owe a great debt to this place. Hopefully I can keep repaying it by continuing to tell the stories that really matter to regional journalists across the land.

So happy 20th anniversary HTFP, here’s to the next two decades.