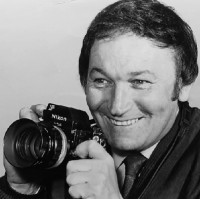 A former chief photographer and picture editor at a regional daily has died aged 87.

Tributes have been paid to Jack Brindley, pictured, who worked on the Peterborough Evening Telegraph for nearly 20 years.

During his time at the paper he was the Peterborough United photographer, while he also had his own gardening column.

Jack died on Wednesday at Peterborough City Hospital after a sudden deterioration of a long-standing illness.

Current Telegraph photographer David Lowndes told the newspaper: “I started at the ET in 1973 as a photographic assistant when Jack was chief photographer. We both came from Stoke-on-Trent so he had a soft spot for me.

“He was a tough chief photographer to work for, but at the end of the day I got a good grounding on how to do the job. He didn’t suffer fools lightly, but he was fair. We both covered Posh [Peterborough United Football Club] for quite a few years.

“Sport and aerial photography were his two passions. It’s a sad day – it’s an end of an era.”

Jack began his career on his hometown paper the Congleton Chronicle and also worked for the Newcastle Times before moving to Peterborough.

During his time at the Telegraph he was the Peterborough United photographer, while he also had his own gardening column.

Former Telegraph editor David Rowell said: “Jack was a great photographer, picture editor and servant of the then ET.

“He had high standards and expected those around him to meet them. He was a tough, but highly respected, boss who kept his team of photographers on their toes.

“He was passionate about the way pictures were presented in the paper. Although I was the editor I regularly got lectured by Jack when the work of his team didn’t appear in the paper to his liking.”

He said: “I recall my happy days as the Posh reporter, travelling the country following what was then a fourth division team. On one occasion, full of youthful vim and vigour, I caused a fuss in the office about the standard of action pictures produced by the staff snappers from matches and that I had no suitable solo action pictures for any midweek features or profiles I wanted to do.

“This was in front of the whole office (there was a bit of a sports v news desk v photographic rivalry at the time, which actually kept us all on our toes professionally). In his growly voice, Jack said he would go to the next match and see what was happening.

“On the following Monday morning, when I got to my desk, there was a stack of photos about two inches high waiting for me. Not only were the match action pictures superb, but there were two pictures of every Posh player who played in the game, the vast majority of them with that player the only person in shot.

“Not a word was said. I took a quieter approach with Jack after that.”

Jack wed his wife Marjorie on his 25th birthday and the couple were married for 62 years.

The had two children, Steven and David, as well as many grandchildren and great-grandchildren.

His son David said: “He loved every minute of his job passionately. It provided him with many opportunities to meet lots of different people including TV stars and Royalty.

“He found the job a privilege because of the variety of people he would meet.”