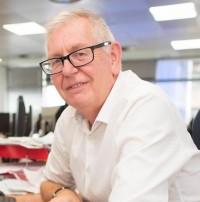 An editorial chief has hit back at an online conspiracy theory circulating about why a daily newspaper was launched.

Richard Walker, founding editor of The National, has responded to social media claims that The National was launched by Newsquest sister daily The Herald “in order to section off pro-independence opinion – with the result being a more Unionist Herald”.

Richard, pictured, has hit out after the theory resurfaced last week, saying he wanted to “clear it up for all of our readers”.

He said that the launch of The National was simply the result of Newsquest identifying a gap in the market for a pro-independence title following the Scottish independence referendum in 2014.

Richard, who now serves as consultant editor on The National, wrote: “Since I started the newspaper and had a front-row seat at the circumstances around the launch, I feel some sort of responsibility to set the record straight, or at least record the events as I see them.

“Firstly, The Herald didn’t launch The National. The Herald and The National are both owned by Newsquest, a company which also owns a number of other UK newspapers.

“Newsquest, to the best of my knowledge, has never voiced support for the principle of Scottish independence, and it would be entirely wrong to attribute the launch of this newspaper to any desire of the company to see Scotland vote to leave the UK. As far as I know, it’s ambivalent on the issue.

Richard went on to clarify The Herald “had nothing to do with either decision”.

He added: “I believe Newsquest simply believed there was a gap in the market… and it was right. The National and Sunday National remain the only independence-supporting newspapers in Scotland, a fact which says many things about the diversity of this nation’s media and none of them good.

“Critics are, again, entitled to be suspicious of an initiative they believe to be inspired by the aim of making money, but if you want a mainstream media company to embrace the prospect of running a pro-independence newspaper – and many, many readers did in 2014 and still do – you have to accept none will do so if it loses money.

“And although Newsquest may not have announced support for Scottish independence, those of us who work at The National certainly do support it.”