Editor leaves weekly after 10 months in charge as predecessor returns

A weekly’s long-serving former editor is returning to the post after his successor announced she will be leaving the newspaper after 10 months in charge.

Emily Pearce, who became the first female editor in the history of the Isle of Wight County Press in April 2019, has announced her departure from the title to take up a new job outside of the regional press.

At the time of her appointment, Emily’s predecessor Alan Marriott moved to a different role focusing solely on the commercial side of the business. 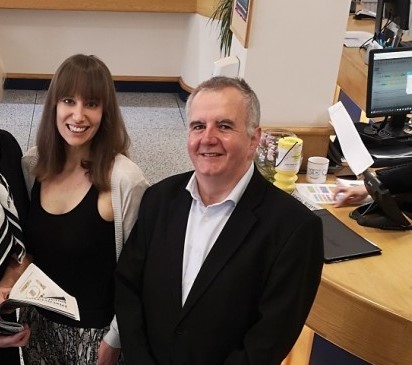 Emily, who was born and brought up on the island and first joined the County Press in 2007, told HTFP: “I’ve absolutely loved working at the Isle of Wight County Press.

“I joined the paper as a trainee 12 years ago and was very proud to be appointed the first female editor.

“I’ve worked with some incredible journalists over the years, who taught me the importance of holding those in power to account and speaking up for the Island community.

“I will miss it very much, but I’m excited to take up a new role in a completely different sector and I know the paper will be in safe hands under previous editor Alan Marriott.”

Alan paid tribute to Emily ahead of her departure, saying: “She is one of the best journalists I have worked with and adapted well to the post of editor.

“She showed great determination in improving our online page impressions to a huge extent.

“I will be looking to drive forward our print and digital audiences to ensure we continue to be Britain’s best-read weekly paper. We continue on our mission to provide seven-day-a-week news coverage online and a strong paper on a Friday.

“The County Press has been around for 136 years and as I joined in the centenary year, I am very well aware of its significance to Islanders.”

The title was independently owned until July 2017 when it was bought by regional publishing giant Newsquest.