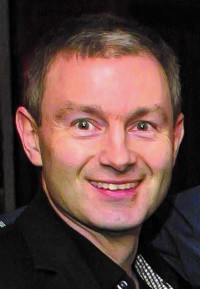 A new editor has been appointed to lead a flagship daily newspaper ahead of its 150th anniversary celebrations next month.

Eoin Brannigan, who had worked for the Irish Daily Star for 23 years and edited the title since 2017, is to take over as editor of the Belfast Telegraph and its weekend stablemate Sunday Life.

His appointment follows January’s announcement that current editor Gail Walker would be moving to a new writing role as editor-at-large for Bel Tel publisher Independent News and Media.

Eoin, pictured, takes charge at a key moment in the newspaper’s history, with its 150th birthday next month coupled with the forthcoming launch of an online paywall.

He said: “Being appointed editor-in-chief for Belfast is a huge honour for me, I had a fantastic time at The Irish Daily Star but I am excited to be joining INM and excited about working with some of the best journalists in Northern Ireland.

“The Belfast Telegraph and Sunday Life have long traditions of outstanding journalism and I am proud that I will be part of the next exciting chapter both online and in print.”

Dublin-born Eoin joined the Star in September 1997 as a member of the sports desk. After a year on the news backbench, he was appointed sports editor in 2000 where he stayed until July 2014 when he was promoted to senior deputy editor.

In his three years in charge of the paper, it picked up six awards at the annual NewsBrands Ireland newspaper awards.

The Irish Daily Star is owned in equal shares by Reach plc and INM as part of a joint venture.   INM is itself owned by Belgian publisher Mediahius.

Publisher at INM, Peter Vandermeersch, said: “I am delighted that Eoin has agreed to take on the role of editor-in-chief of our Belfast titles.

“This is once again a key senior editorial appointment coming to our organisation in the last six months and I think our ability to attract such talent is testament to the reputation of Mediahuis as a publisher that believes unreservedly in strong, independent and quality journalism which makes a positive contribution to people and society.

“I believe that Eoin has all of the qualities and skills needed to drive the team forward in the context of our new digital propositions and integrated newsroom”.

Gail edited the Bel Tel for five years, and last year led the paper to the UK Regional Newspaper of the Year crown at the Society of Editors’ Regional Press Awards.

In her new role, she will be tasked with producing in-depth quality journalism and insight into a wide range of subjects relevant to life in a post-Brexit Northern Ireland.