A regional daily rearranged its masthead to promote an anagram competition it is running for readers.

The Dundee Evening Telegraph briefly became the ‘Enniveg Greathelp’ in support of the contest, which comes with a £100 cash prize.

It is not the first time Evening Telegraph readers will have seen a different masthead atop their paper in recent times.

On Halloween last year, it became the ‘Evening Terrorgraph’ for one edition only. 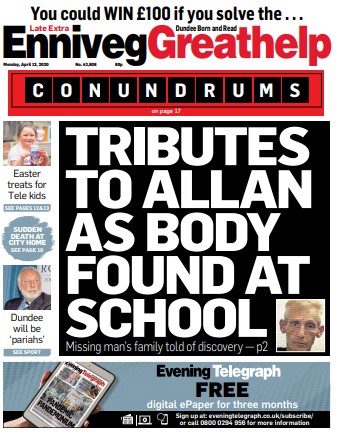 The new competition launched on Monday.

Editor Dave Lord told HTFP: “During the lockdown we thought a conundrum competition would be a good way to give our readers a little brain workout.

“Hopefully our masthead will help to draw a bit of attention to the contest although I am not sure the change of name to Enniveg Greathelp will be anything other than a temporary measure.”