A regional daily has apologised after a first person piece which attacked diversity in the United Kingdom.

The Hull Daily Mail has said sorry over the article, written by a reader called Will Wright, which accused people with ancestry from the Indian sub-continent and the Caribbean of having “divided loyalty”.

The piece’s publication drew “anger and outrage” among readers, according to Hull West and Hessle MP Emma Hardy, who took to Twitter to criticise it. 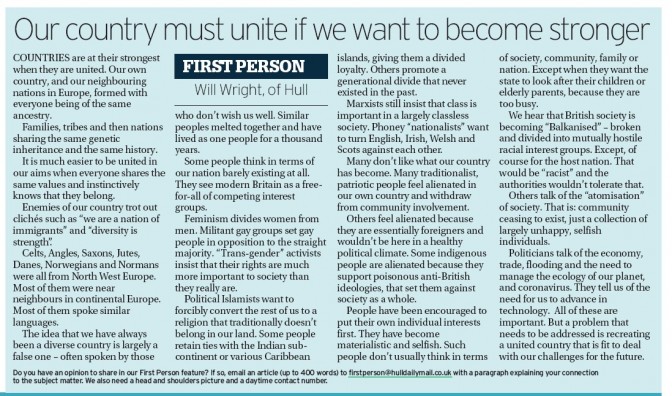 The article, pictured above, appeared in Thursday’s edition, with an apology appearing the following day.

Jenna Thompson, digital editor of the Mail’s Hull Live sister site, posted on Twitter: “We apologise unreservedly. The views published do not reflect ours as a newspaper and were the opinion of a reader, which we understand have caused offence to communities.

“With regards to how this happened, an unedited submission was published when it should not have been.

“We have been experiencing disruption as we begin working from home to protect the health of our employees and this was not seen by a senior member of staff before printing.

“An apology will be published in tomorrow’s Hull Daily Mail and the First Person column will be withdrawn until further notice.

“We have spoken to the staff member involved who is, understandably, devastated. There will be additional staff training and we will learn from this.”

In her own statement, published on Thursday, Labour MP Ms Hardy said: “It has been brought to my attention by many of my constituents today, that an article in the Hull Daily Mail has caused a lot of anger and outrage with its divisive and hateful rhetoric.

“We as a community and a country can not tolerate incitement of hatred against anyone, especially when we are united in our battle with coronavirus.

“I have spoken personally to HDM and they assured me they will be printing a public apology tomorrow.

“I hope this can then be put to be and we can move forward together and united.”