Barnard Castle weekly praised for not splashing on Dominic Cummings

A weekly newspaper in Barnard Castle has been praised after splashing on a different story from the Dominic Cummings controversy.

Readers and a former editor have applauded the Teesdale Mercury’s decision to make the government’s £1bn plan to dual the A66, which runs through its patch, its front page lead today instead of the Prime Ministerial adviser’s admission of his infamous visit to the town during coronavirus lockdown restrictions, which featured further down the page.

Mr Cummings has defended his journey to Barnard Castle, which he claimed he undertook in order to test his eyesight before driving to London from County Durham, despite around 40 Tory MPs now calling for him to resign over the matter.

Mercury journalist Stuart Laundy told HTFP he had agreed with editor Trevor Brookes, who is on holiday, that the visit to the town by Boris Johnson’s aide should appear on the front page, given it was “now at the centre of major political intrigue”. 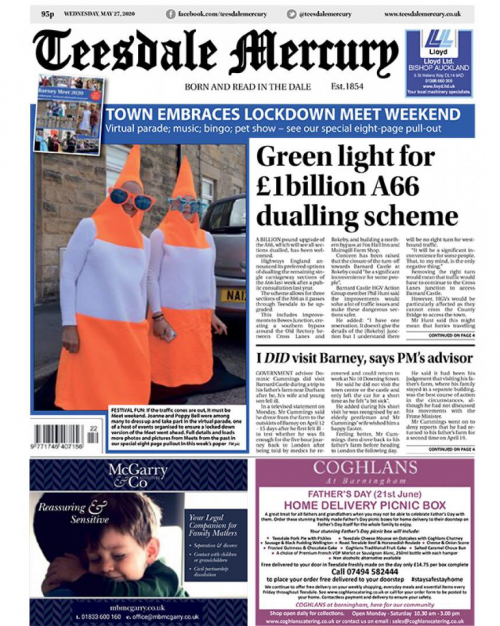 But he added: “In the meantime, Highways England had announced late on Friday that a huge project to fully dual the A66 had been given the go-ahead after months of consultation.

“This will have a huge impact in the weeks, months and years ahead, directly affecting both residents, farmers and businesses who live and operate on the single carriageway sections through the patch and the many readers who use the A66 daily.

“Whit weekend is also Barnard Castle’s traditional carnival weekend and there had been a huge community effort to organise a ‘virtual’ parade and other events to ensure that it went ahead in some form.

“Such was the response that we were able to put out, at short notice, an eight-page photo supplement and this was the obvious candidate for a front page picture.”

Stuart added other factors in the decision included the fact that the Mercury goes to print on a Monday evening.

He said: “Although the paper is available in some outlets on a Tuesday, a good number – maybe even the majority – of readers, including those who get it delivered, do not get the paper until Wednesday morning, by which time the Cummings story would have moved on.

“As ever, it’s all a matter of judgement and bearing all of the above in mind – along with the fact that the Mercury’s great strength is its coverage of community events and issues – I judged the A66 story should be the splash with a carnival picture of a mum and daughter dressed up as traffic cones to give the page impact and the Cummings story down page.

“Others will disagree – that’s newspapers – but I have to say the response to this week’s paper, both from emails and on social media, has been supportive, with a huge amount of traffic generated by the carnival supplement and I am happy with the way not just the front page but the whole paper turned out this week.”

Posting on Twitter, he said: “This very weekend, exactly 15 years ago, I was editor of Barnard Castle’s local newspaper.

“We were being filmed for a TV documentary and I remember panicking that we’d be on telly with not one single story worthy of the front page. No such problems for this week’s Teesdale Mercury.

“Love the fact that Cummings isn’t the splash in today’s Mercury. A66 upgrade deemed to be bigger news in Barnard Castle.

“Right choice for me. Bet locals are fed up of the fuss by now.”

Yesterday Northern Echo editor Hannah Chapman, whose paper covers County Durham, appeared on BBC Breakfast to share her readers’ “fury” over the decision by Mr Cummings to drive to the Darlington-based daily’s patch while his wife was displaying COVID-19 symptoms.

Three Reach plc dailies in the North-East of England – Newcastle-based titles The Chronicle and The Journal, and Middlesbrough’s Teesside Gazette – focused on the “mounting pressure” facing Downing Street over the issue on their front pages today. 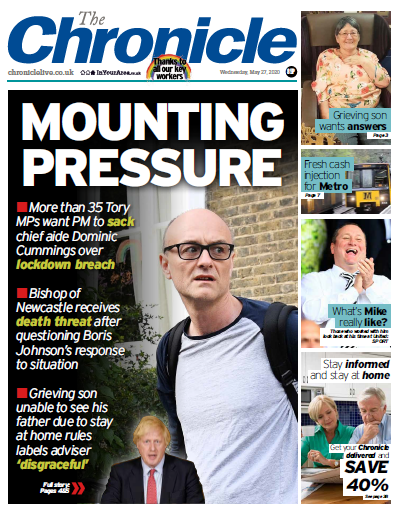 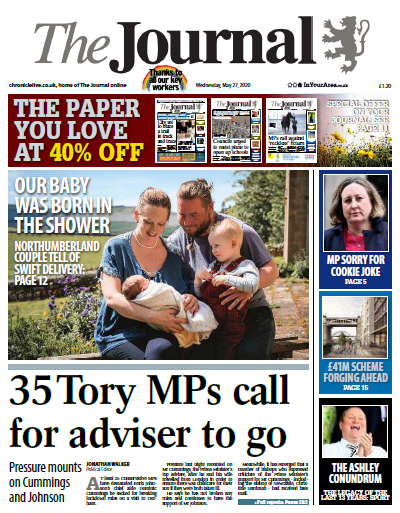 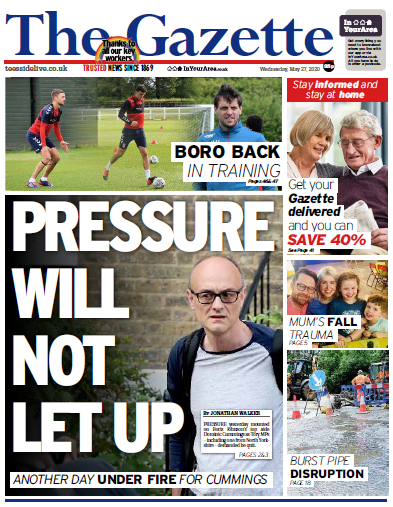