The editor of a regional daily which covers County Durham has shared her readers’ “fury” over the Dominic Cummings controversy on national television.

Northern Echo editor Hannah Chapman has hit out at Downing Street’s response to coverage of the issue in an interview with BBC Breakfast.

Mr Cummings yesterday defended his decision to drive to County Durham during coronavirus lockdown restrictions, and has been backed by Prime Minister Boris Johnson despite multiple calls for him to resign.

Particular controversy has surrounded the special adviser’s decision to drive to the town of Barnard Castle, which he claimed he did to test his eyesight before driving back to London. 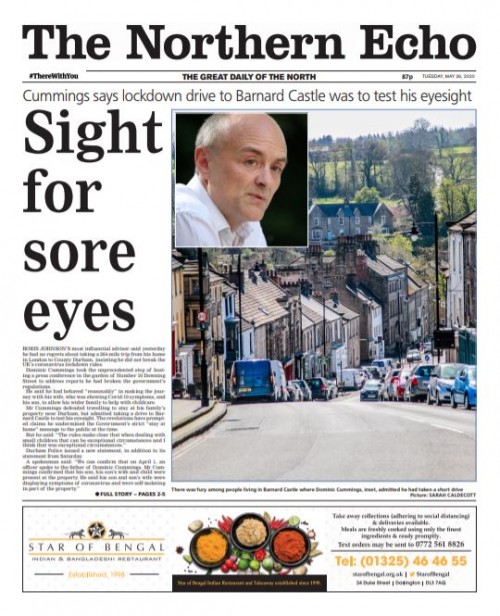 This morning the Darlington-based Echo’s front page, pictured above, showed a picture of the town, accompanied by the headline ‘Sight for sore eyes’.

Hannah told BBC Breakfast today: “People are furious that this interpretation of the guidelines has been put forward when everybody was staying to the letter of the law and the ‘stay at home’ message.

“Then there’s the issue of how it’s been handled, and there was a lot of deflecting the blame on to the media yesterday, I felt, in the press statement, whereas they had ample opportunity over the last few days and few weeks even to give that full account, come forward and say the reasons for the travel to County Durham.

“At that point, they could’ve explained themselves, put forward the reasons why and then maybe apologised. Then people might have had a little bit more sympathy.”

Douglas Ross, Under Secretary of State for Scotland, became the first government minister to resign over the matter this morning.

A number of Tory backbenchers have also urged Mr Cummings to consider his position.

Hannah told HTFP: “The reaction from Northern Echo readers has been enormous, with the vast majority furious about Mr Cummings making the journey to this region, while others obeyed the ‘stay at home’ message in its simplest form.

“There has also been anger about the issue of people suspected as having coronavirus travelling into County Durham, potentially putting pressure on health services here, which went against everything the Government seemed to be advising – not to mention the idea of taking a drive across the county to ‘test his eyesight’ two weeks later.

“To add to that, there has been the national spotlight on Barnard Castle, a town name which seems to flummox many commentators.

“It’s been referred to Bernard Castle, Castle Barnard and the castle. To locals, it’s simply Barny.”