A regional daily has launched a new bus marketing campaign after new figures revealed it to be the UK’s best performing title of its kind.

Belfast-based daily the Irish News has had its ABC certificate published for the first half of the year, with a circulation of 31,613 representing a 1.2pc year-on-year decrease.

The figures also confirm the News as the second best selling regional title in the UK after Aberdeen’s Press & Journal.

HTFP previously reported the most recent ABC figures for many dailies in Great Britain last month, before the News’s certificate was released.

The figures make the Irish News the UK’s best performing title for the second year running, having also topped the league table in the period January to June 2019.

The next best-performing title in the first six months of this year was the Bournemouth Echo whose average circulation of 9,589 represented a 7.4pc decrease on the previous year. 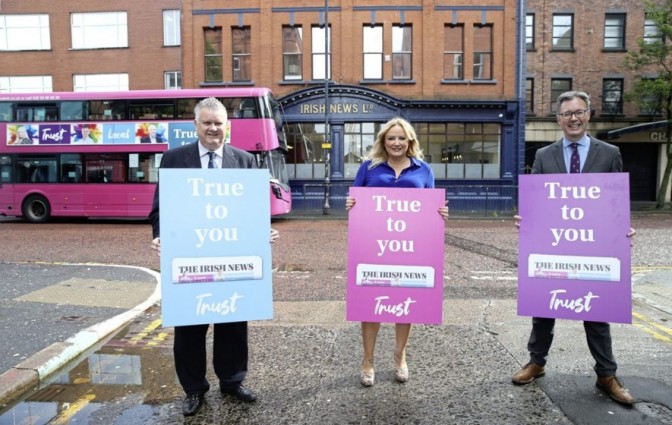 Editor Noel Doran said: “These are exceptionally difficult times for all newspapers and their readers.  To come through the lockdown with only a marginal drop in sales is a significant achievement by any standards.

“Our figures have continued to recover since the end of June, and we are very grateful for the huge loyalty displayed by both our print and digital audience.”

ABC gave all publishers the option of publishing two separate certificates due to the extraordinary circumstances of the crisis – one being a standard certificate for January to June 2020 that includes all issues outside the lockdown period, and another showing circulation for issues affected by lockdown.

The daily has also launched a new bus T-side advertising campaign with the message ‘True To You’.

The campaign, which will see the ‘True to You’ message emblazoned on around 70 buses on every route across Belfast, complements an in-paper promotion highlighting the work of the Irish News’ journalists and columnists.

Marketing manager John Brolly said: “We are immensely proud to have such a loyal readership and we thought it was important that we reflected the bond we have with them in our creative by simply using the words ‘True to you’.

“Trust and quality journalism are hugely important in today’s world, and by picking up a copy of our paper every day, the public can be confident they are using a ‘trusted’ brand to source their news.”