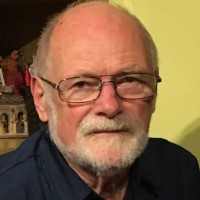 A weekly newspaper’s launch editor and former NCTJ director has died while on holiday in Ukraine.

Tributes have been paid to Brian Mason, left, who was the first editor of the Telford Journal, which was launched in 1973 to serve the expanding Shropshire new town.

He went on to become the editorial training manager for the Midland News Association from 1981 – training journalists from Wolverhampton daily the Express & Star, the Shropshire Star and numerous weekly papers.

He also oversaw the move to emerging new technology, and served on the main board of directors of the National Council for the Training of Journalists.

Brian, who retired in 2000 after 42 years in journalism, is thought to have had a heart attack while on a break with wife Beryl.  He was 79.

His daughter Caitlin Bisknell said: “He had an enormous impact on many young journalists, many of his trainees went on to work for national newspapers and media organisations. As editor of Telford new town’s only newspaper he played a crucial role in the early days of the developing new town.”

Brian began his career in 1958 as a trainee reporter on the Bexleyheath and Welling Times, before moving to the East Grinstead Observer three years later.

In 1964 he moved to Shropshire as chief reporter on the Wellington Journal & Shrewsbury News, where the reporters’ office was a caravan in the car park.   He later became news editor of the Shropshire Journal.

He also served on the Newspaper Society training committee, helping to rewrite the new journalism NVQ standards, and was father of the National Union of Journalists chapel in Shropshire for a number of years.

Brian is survived by Beryl, as well as children Caitlin, Claire, Iain, and Gavin, eight grandchildren, and six great-grandchildren.

A celebration of Brian’s life will be held on a date to be announced.