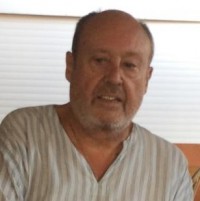 A regional journalist whose skills “could have taken him to Fleet Street” has died aged 69 following a cancer battle.

Tributes have been paid to Mike Broadis, left, who worked as a sub-editor and later features editor on the Cumberland News.

During his career, Mike also worked for Border Television and owned Carlisle News Agency, which supplied stories to national newspapers.

Mike, who fulfilled a long-time ambition by retiring to Crete 12 years ago, died last month having been diagnosed with cancer in January.  His funeral took place in a Greek Orthodox church on the island.

Former colleague Andrew Leitch told the Carlisle News & Star: “Mike was a great asset to the newspaper, both for his sub-editing skills and also his larger-than-life personality. The newsroom was often much quieter when he was on a day off.

“Careerwise, I think that his skills could have taken him to Fleet Street. But he was very much a Carlisle lad and preferred the Great Border City to the life of the big city.”

Mike was the son of England footballer Ivor Broadis, who later became Carlisle United reporter for the News, and his late wife Joan.

His sister Gillian also worked as a copy-taker at the newspaper.

In an obituary for the News & Star, features writer Roger Lytollis wrote: “Time spent with Mike Broadis was an education which came with added laughter.

“His dry sense of humour and his encyclopedic general knowledge were among the attributes which made Mike a hugely popular figure in his native Carlisle.”

After his retirement from journalism Mike and his partner Frances Gill fulfilled a long-term ambition by moving to Crete.

Frances, who was with Mike for 26 years, said: “He went every evening to a café in the village. It’s where the Cretans go to drink coffee and put the world to rights. The ex-pats use it as a pub because it also sells beer.

“Michael would sit and chat to people about a variety of things but especially politics, history and football.

“Michael had a very sharp intellect. His big passion was history, especially Greek history. He knew something about everything. He could fit into any situation and talk to anyone.”