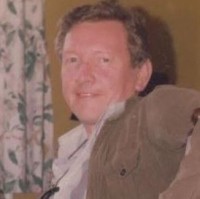 A regional journalist who also worked on Fleet Street and in book publishing has died aged 84.

Tributes have been paid to Victor Briggs, who spent 18 years with the Kent & Sussex Courier – having intended initially to stay for just two.

Victor, pictured, became chief reporter at the Courier, based in Tunbridge Wells, and later worked at the Kent Messenger between 1993 and 2006.

His family told Kent Live: “His big passion in life was writing, about anything and everything. He just had to write. This continued throughout his life until sadly he could no longer type due to Dupuytren’s contracture (claw hand) which he developed in his hand.”

Victor started in journalism as a reporter on wine industry trade magazines, moving on to reporting for the Hendon and Finchley Times and later as assistant press officer promoting films and actors for Rank and Universal International Pictures USA.

He later worked in various writing and sub-editing roles at the magazine division of News of the World, the Daily Sketch and The People.

Victor wrote a total of eight fiction and non-fiction books, and also spent time as a literary agent for American novelist and playwright Norman Mailer in the UK.

His daughter Deborah Cartam said: “Dad had a great sense of humour, always ready with a joke and was possibly the most brilliant storyteller ever.

“He had such an interesting life and career and would have us all enthralled listening to his stories about being a young journalist and the people he met and came across over the years.

“Dad was very much loved by all of his family and we will miss him dearly.”

Victor was married to Sally Barrett from 1954 until their divorce in 1973, and together they had two children, Simon and Deborah, now 63 and 62 respectively.

He lived in Mayfield, Sussex, with “much-loved” partner Angela Bassett from 1973 until she died in 1996.

Victor’s funeral will be held at St Dunstan’s Church, in Mayfield, at 2pm on 25 April.